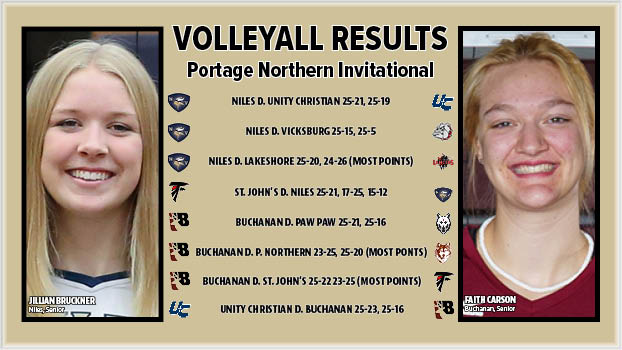 PORTAGE — Both Niles and Buchanan were successful at the Portage Northern Invitational Saturday.

The Vikings and Bucks both went 3-1 on the day.

“Today was another good process today for us,” said Niles Coach Samantha Zimmerman. “One of our goals was to start strong, and we executed that perfectly. Now we need to finish strong as well and learn to be consistent.”

Zimmerman said that the way the tournament was structured, her team did not necessary adapt well to having to wait to play.

“It was a long day for everyone, and the long breaks got the best of us,” she said. “We did some really good things today that we can build on going into next week. Unfortunately, we didn’t play with the intensity and energy that we normally do and that really affected us today. I know we will bring that energy with our first home game of the season on Thursday versus Vicksburg and our home quad on Saturday.”