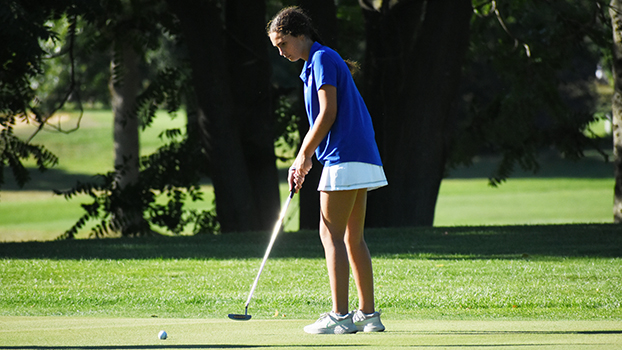 The battle so far this season has been for spots three through six. It was again Monday afternoon.

Dowagiac had locked down that position for most of the last month, but at Blossom Trails Cassopolis jumped out to third, for its best finish of the year, as the Rangers shot 203 as a team. South Haven also leapfrogged the Chieftains as the Rams finished fourth with a 211.

“I am very proud at the progress the girls have been making considering our inexperience,” said Cassopolis Coach Joseph Westrate. “They have worked hard, especially on their short games.

Also, we are in a tough league, and I think this helps us get better every match.”

Jordyn Bonnema, of Kalamazoo Christian, was the medalist once again Monday as she shot 36. Bonnema has been the medalist in all but one jamboree. She has been on a tear the past two weeks as she has shot 39 at States Golf Course in Vicksburg and 37 at Indian Lake Hills Golf Course.

The Rangers were led by Marie Insenser’s 47. Nola Hawkins also cracked the top 10 with her 48.

The Chieftains were led by Rebecca Guernsey’s 49. Guernsey is the only golfer to earn medalist this season besides Bonnema.

“Another bad day for the Chieftains,” said Dowagiac Coach Bob Turner. “We played without one of our top four, but did not play well enough overall. Hopefully, we can bounce back tomorrow at Eastern Hills.”

The Lakeland/KVA moves to Kalamazoo today for the Comstock jamboree. Teams will tee off at 4 p.m.

The Wolverine Conference golf race continues to be tight as Vicksburg won the jamboree hosted by Paw Paw Monday with a one-stroke win over Sturgis, 179-180.

With Plainwell finishing third with a 183 and Otsego fourth with a 190, the three teams are deadlocked atop the standings with 27 points. Sturgis is fourth with 22 points.

Niles finished sixth with a 195 and Edwardsburg was seventh with a 196.

Plainwell’s Renae Jaeger continues to lead the way as she shot 37 Monday.

Edwardsburg’s Chloe Baker was second with a 40. Niles was led by Maddison Brook, who cracked the top 10 with a 46.

“Niles girls golf last night at Paw Paw had two girls break 50 for the first time this year — Maddy Brook with 46 and Eva VanDyke with a 49,” said first-year Niles Coach David Schiele. “Baylee Davis and Allison Andres, both with 50, are the best scores this year for them. We beat out Three Rivers and Edwardsburg. Very proud of my Niles girls and the progress they have made.”