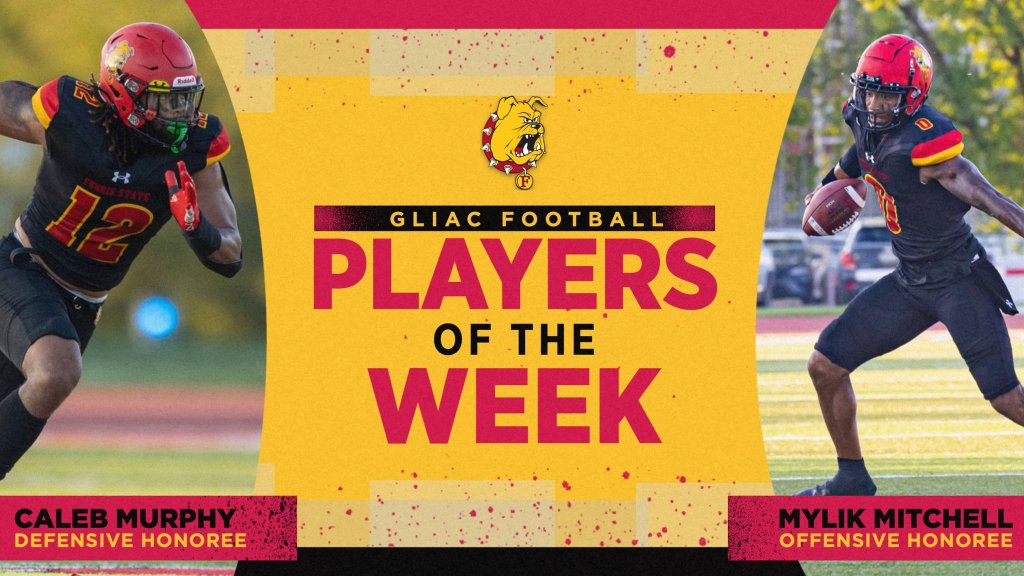 BIG RAPIDS — A pair of Ferris State University football standouts have been chosen as the first Great Lakes Intercollegiate Athletic Conference Players of the Week of the season after leading the top-ranked Bulldogs to a 36-20 home win over Central Washington last Thursday night before a crowd of more than 7,000 fans at Top Taggart Field.

Mitchell had an impressive debut for the defending national champions as FSU recorded its 39th consecutive regular-season victory with a 36-20 opening night win over Central Washington in Big Rapids. Mitchell threw for 339 yards on 19-of-29 (65.5%) passing in the victory while also rushing for a team-high 34 yards on 18 attempts. He completed a 64-yard touchdown throw to give FSU the early advantage and added a two-yard TD run in the third to push the margin to two scores. His play helped the Bulldog offense generate 494 total yards in the win and he led FSU on five scoring drives in the contest.

Murphy had a big game for the Bulldogs in the season opener, totaling team-high numbers in tackles, sacks and tackles for loss in the win over Central Washington, which reached the D2 Playoffs a season ago. Murphy finished with 10 tackles, three tackles for loss (-10 yards) and 1.5 sacks (-9 yards) while also garnering three quarterback hurries in the victory. His play helped the FSU defense limit the Wildcats to only 227 yards for the game and only seven second-half points, which came on a short field. The Bulldogs also generated five quarterback sacks in the triumph.

This week, the Bulldogs travel to Hickory, North Carolina, to face yet another NCAA Division II Playoff team from a year ago in nationally-ranked Lenoir-Rhyne. Kickoff is set for 1 p.m. and the game will be streamed live on a pay-per-view basis on FloSports via FloFootball.com. The game will also be carried live on local flagship station Sunny 97.3 FM and the Bulldog Sports Network with free online audio at FerrisStateBulldogs.com, starting with an extended pregame show at noon.