Hope College beats the heat and Aurora in its season opener 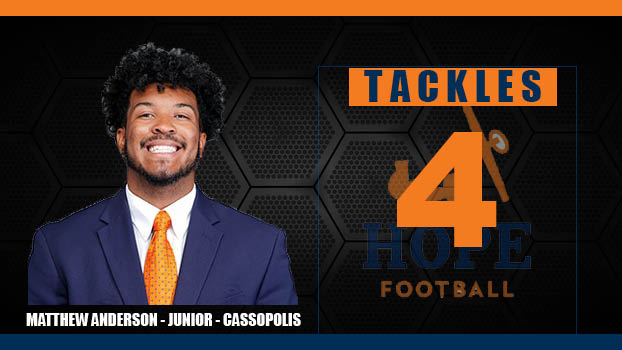 HOLLAND — The Hope College football team flourished in the heat of the moment — delivered by a 2021 playoff qualifier on an 80-plus degree afternoon at Ray and Sue Smith Stadium.

The Flying Dutchmen soared to a 38-34 victory against Aurora University (Illinois) by overcoming a 17-point, third-quarter deficit with the game’s final 21 points.

After running back Kenyea Houston’s go-ahead, 1-yard touchdown run with 32 seconds remaining, cornerback Adam VanderKooy sealed a dramatic victory with an interception on Aurora’s next play from scrimmage. It was VanderKooy’s second interception in a seven-minute span.

“They’re a really good football team. They had a ton of guys coming back. It is huge. It makes all the difference in the world to get out of the game like that,” Stuursma said. “It’s 120 some degrees on the turf. I think we had two cramps. That means our guys were prepared. They did their job. Dan Margritz and our strength staff did their job.

“I’m proud of them. It takes everybody pushing and pulling the right levers to make sure we’re doing the right things.”

The heat was on the Flying Dutchmen after a 10-point quarter.

The Spartans led 34-17 with 7:50 remaining in the third quarter after they answered a 74-yard touchdown pass from quarterback Chase Brown to receiver Terrell Harris on their next play from scrimmage. Quarterback Josh Swanson hit a streaking Michael Boland for a 79-yard score for his fifth touchdown pass of the game.

The teams then traded unsuccessful possessions. Aurora tackled Romano on a fourth-down run at the Spartans 9-yard line to maintain a 34-24 lead.

Aurora drove down to the Hope 16-yard line before VanderKooy (Indianapolis, Indiana / Brebeuf Jesuit) leaped for a one-handed interception near the goal line.

The Flying Dutchmen yielded one first down on Aurora’s next possession before forcing a punt and taking over with 3:08 remaining at the Hope 17-yard line.

Brown, who finished 31-off-47 for a career-best 456 passing yards, marched back down the field.

On the drive’s 14th play, Houston (Chicago, Illinois / Westinghouse) leaped into the end zone on a 1-yard plunge for the go-ahead score with 32 seconds remaining.

“First goal is to win Week 1,” Brown said. “Now we can focus on Week 2 and keep this rolling. Having a good second half is a great way to go into Week 2.”

Hope’s next game is Saturday, Sept. 10, at 1 p.m. against Coe College (Iowa) at Ray and Sue Smith Stadium. There will be a free team poster giveaway.

Brown completed passes to eight different receivers during the game, including wideout Terrell Harris (Whitehall, Michigan / Whitehall), who finished with a team-best 187 receiving yards on seven matches and touchdown catches of 54 and 74 yards. McKenzie totaled a career-high 151 receiving yards and a team-best 11 catches.

It was a team effort for the Flying Dutchmen on defense, too.

Hope overcame from coverage breakdowns to hold Aurora scoreless over the final 22 minutes of the game.

Matthew Anderson (Cassopolis /Cassopolis) had four tackles to kick off his junior year.

Adding to the challenge was a chess match against Aurora head coach Don Beebe, an NFL receiver who played in 116 games over nine seasons, including a Super Bowl XXXI championship with the Green Bay Packers. Beebe also played in three Super Bowls with the Buffalo Bills.

“You saw us play a lot of players. That might be a record for how many we played in a really close ball game on defense,” Stuursma said. “We rotated a lot of guys on the defensive line. We started three freshmen: one up front and two on the back end. We’re going to make some mistakes, but we’re going to try to make mistakes with guys who want to play fast and within the system we’re doing. They locked down when they needed to.

“We gave the game ball to Jacob Pardonnet. What he did coming in last spring and making those guys buy-in was remarkable. I am so proud of him.”