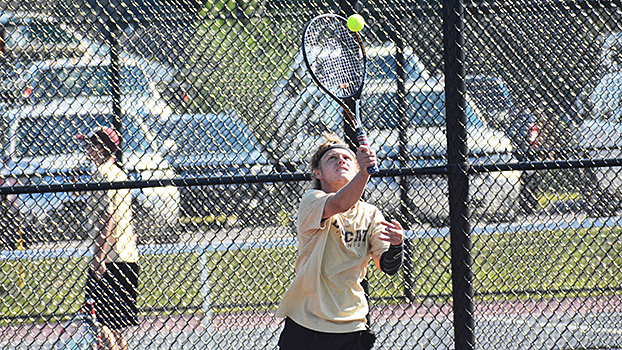 THREE RIVERS — Area tennis team have had a busy week even with the weather shortening it by a day.

On Wednesday, Niles was blanked by host Otsego in a Wolverine Conference match 8-0. The Vikings dropped their league match against Three Rivers Tuesday, 8-0.

Despite the final score, the Vikings were competitive in nearly every flight against the Bulldogs.

The best match of the day came at No. 3 doubles where Hunter Suddon and David Ehlert dropped a 7-5 and 6-3 decision to Jack Clapman and Spencer Shearer.

Against the Wildcats, Three Rivers was a bit more dominant in sweeping all eight flights in straight sets.

Elias Babler put up the best fight for the Vikings at No. 1 singles where he lost to Brady Minnard 6-4 and 7-5. Jackson Podlin and Rylan Custard were also very competitive, losing 6-2 and 7-5 to Kayden Stratton and Justin McDonald at No. 2 doubles.

The Bobcats have faced some of their toughest competition of the season over the past five days.

On Saturday, Brandywine competed in the Kalamazoo Loy Norrix Invitational where it defeated Plainwell 7-1, but lost to Lake Odessa 8-0 and Loy Norrix 5-3.

On Tuesday, the Bobcats were defeated by state powerhouse Allegan 7-1.

Going undefeated at Loy Norrix were Brody Prenkert at No. 4 singles, Jayden Spliter and Matt Veach at No. 2 doubles, along with Blake Magyar and Ryder Richard at No. 3 doubles.

Magyar and Richard were the lone winners against Allegan as they won in three sets, 4-6, 6-3 and 6-3.