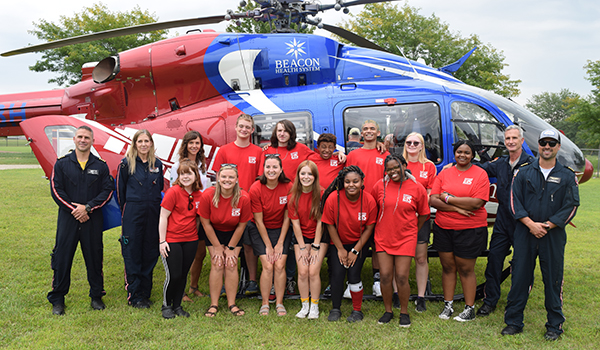 In addition to experiencing firefighting and vehicle extrication, students witnessed the impact of air bags (one shot a basketball as high as the treetops), learned to backboard and load patients into an ambulance or onto a wheelchair-like “stair chair” and quizzed the crew of a Memorial MedFlight helicopter that landed Thursday afternoon beside the fire station.

Dowagiac Firefighter II Britney Peet, a three-year EMT with Pride Care Ambulance and full-time ER Tech with Spectrum Health Lakeland Watervliet Hospital, demonstrated equipment, from color-coded airway supplies such as I-gels and tourniquets to shearers that “cut through leather belts like butter” in removing clothing to assess major trauma from head to toe.

“Any time there’s a structure fire, there’s an ambulance parked outside to rehab overheated, dehydrated firefighters,” said Peet, who this fall begins studying SMC nursing prerequisites. “They work together in tandem. In Cass County, most ambulance crews work 24-hour shifts, clocking in from 7:30 a.m. until the next morning. With Pride Care, three days a week are mine. You may get eight calls a day. If you’re taking a shower, you run the call with shampoo in your hair. It’s a tough job, but definitely worth it if you have the passion. In Dowagiac, we have a lot of car accidents, cardiac arrests, overdoses and lift assists. I have three career saves (administering cardio-pulmonary resuscitation, or CPR).

“If we don’t coordinate and move somebody incorrectly, you can paralyze them,” Deputy Fire Chief Tony Stewart said. “The (EMT positioned) at the neck controls the lift.”

Jaedyn and her partner, Seleste, won the communications contest building a small Lego fire scene. Jaedyn assembled plastic bricks in one room guided by Seleste reading instructions by radio from another. To layer realism on a stressful scenario, disorienting sirens wailed.

“Everybody has a niche,” Stewart, a 17-year veteran, said. “Put them all together, you get a great team. We don’t get cats out of trees, although we did get a set of keys out of a tree one time by spraying a hose.”

“If somebody’s leg is stuck,” Peet said, “amputation is out of our scope of practice.”

“You don’t want a paramedic doing surgery on you,” Stewart agreed. “We don’t extricate the person out of the car, we cut the car away from the person.”

“For a guy who didn’t like school, all I’ve done for the past 20 years is learn. That’s the beauty of emergency medicine,” Berger said.

At 120 mph 1,500 feet aboveground, a two-hour flight saves a four-hour drive. “We can go to Cleveland, Cincinnati, Indianapolis, Chicago,” said Tracey Daggy, a flight nurse for 21 years. She has also been an Emergency Department RN for 27 years at St. Joseph Regional Medical Center, Mishawaka.

“Ann Arbor is a 45-minute flight, Kalamazoo 30 minutes” based at South Bend International Airport. “I’ve gone as far as Pittsburgh, but that isn’t typical. Jet fuel costs $6-$7 a gallon right now; we burn about a gallon a minute.”

Pilot Kyle McClure, who flew Black Hawks for the Army, is training pilot Christopher Houser to fly for MedFlight.

Michael Humphrey is aboard as flight paramedic, which he’s done for Beacon Health System for 16 years. He’s also a captain with the South Bend Fire Department, which he joined in 1998.

Wednesday’s entanglement trainer simulated a firefighter getting caught in wires in an attic space. Students donned full turnout gear to maneuver through the trainer with the help of one partner giving directions. Students also learned to use fire extinguishers on campus to put out a stove fire. A ladder climb was done on the ladder truck at the station, with some students ascending to the top of the 75-foot ladder.