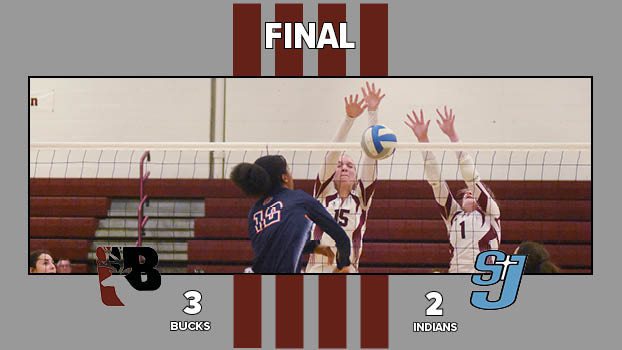 The Carson sisters had a big night at the net for the Bucks. Senior Faith Carson had 13 kills and nine blocks, while sophomore Alyssa Carson had 15 kills and eight blocks.

Alyvia Hickok also had 15 digs and led the team with 42 assists.

The Bucks return to the court Tuesday when they travel to Coloma for a quad.

The Vikings squared their record at 1-1 with a 7-1 non-conference win over Bridgman/New Buffalo/Our Lady of the Lady Thursday.

Niles (1-1) swept the doubles flights by winning all four in straight sets.

The most competitive match of the day came at No. 2 singles where the Vikings’ Jack Badman outlasted Angelo Ciccarelli 6-2, 6-7 and 10-4.

Niles is back on the court today as it travels to Kalamazoo Central for a match between former SMAC foes.