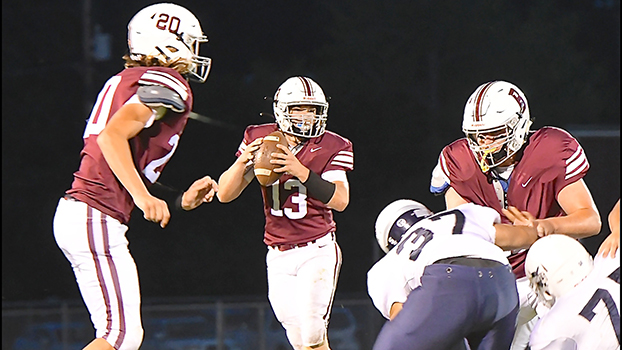 The Bucks scored their 46th point in their fifth game of the season during the 2021 campaign and are currently on pace to past last year’s point total of 119 in their third game this season.

“Tonight, was fun,” said Buchanan Head Coach Mark Frey.  “Last year, we felt that we were relying on just one or two guys, but this year we were able to spread it around and watched a lot of guys make some big plays.”

Three of those plays Frey mentioned involved Legault and OverBerghe.  They connected on touchdown passes of 55, 71, and 84 yards in the first half to put the Bucks in command with a 40-14 lead at halftime.

LeGault finished 9-of-16 passing for 304 yards and three touchdowns and added nine rushes for 59 yards. OverBerghe hauled in seven passes for 255 yards and three scores.

“They (Legault and Overberghe) are electric,” Frey said..  “They worked all summer long in 7-on-7 and working extra hours. We drew that first play on offensive, especially for them.”

“Thomas and I have been very close since we were young. He’s my best friend,” Legault said.

“We have been putting in the work since freshman year. We continue to work on running routes and learning his speed after practice”.

But even with the bulk of their yards through the air, Buchanan’s emphasis was on the ground. Last year they averaged less than 100 yards rushing per game. Against Saugatuck, they rushed for 187 yards, averaging 5.1 yards on 37 attempts.

“Last year we felt that our run game was kind of weak,” Frey said.  “We put a focus this offseason on getting stronger and moving people through the trenches.”

Patrick Lavery [60 yards], Nico Finn [45 yards] and Leland Payne [31 yards] also had an excellent night in the running game as well with a touchdown each.

The bright spot for Saugatuck was William Doucette. The running back had touchdown runs of 52, 44 and 35 yards. He finished with 169 yards on 13 carries.

Buchanan faces Niles Thursday in a game that will be played at Berrien Springs High School. Last year the Bucks were shut out by their rival neighbor 26-0.