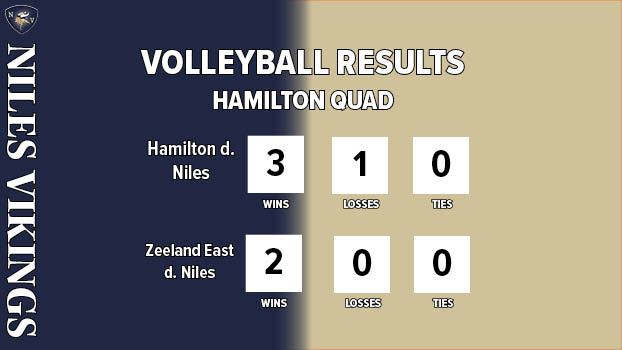 HAMILTON — For the second time in this young season, the Niles volleyball team played in back-to-back events.

The results Tuesday night was similar to last weekend’s as the Vikings played well on the first night, but struggled the second day,

“We started slow against Hamilton, played point for point volleyball, and just couldn’t finish,” said Niles Coach Samantha Zimmerman. “In game two we picked it up, played more discipline, and fought hard to get the win. Then on the second rally of game three, one of our middles got hurt and had to come out of the game. That is no excuse for all the errors we made, but we are a young team and they were worried about their teammate.”

Zimmerman decided to make some changed for the second match to see if she could find a rotation that would spur the Vikings.

“We tried to regroup and play with a totally different line up against Zeeland East,” she said. “Again, we played point for point volleyball and just couldn’t finish, and it carried over to the second set where we couldn’t stop their middles. Unfortunately, we didn’t get the outcome we wanted tonight, but adversity will only make us stronger in the long run. We have to shower off tonight, refocus, and play for each other tomorrow at Sturgis with one of our starting middles out.”

Jillian Bruckner finished with 12 kills and a block, while Bree Lake had seven kills. Anna Johnson had 16 assists, while Amelia Florkowski had 15 digs.