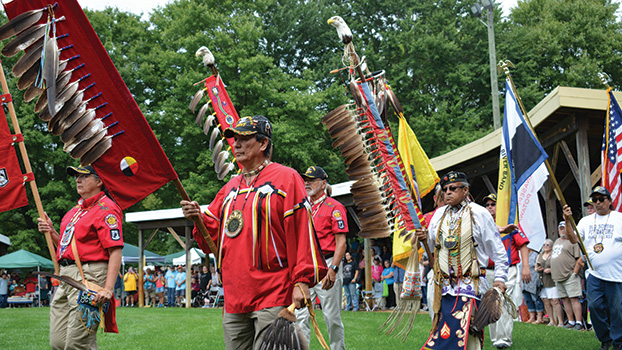 The Pokagon Band of Potawatomi Indians hosted its 33rd annual Kee-Boon-Mein-Kaa Pow Wow Saturday and Sunday at the Pokagon Band’s Rodger Lake campus, 58620 Sink Road. Dancers from all over the county competed at the event. (Leader photo/SARAH CULTON)

Celebrating its 35th year, the Kee Boon Mein Kaa Pow Wow will feature a celebration of traditional Pokagon culture, including regalia, song, as well as a dance and drum contest.

“We are very excited to celebrate the return of the Kee Boon Mein Kaa Pow Wow this Labor Day Weekend,” said Rebecca Williams who serves on the Kee Boon Mein Kaa planning committee. “The public is encouraged to attend to learn about Pokagon traditions and culture, but also be entertained by the amazing dancers and drummers who are competing this year. We look forward to welcoming everyone and having a great event.”

Only service animals with certificates are allowed on the pow wow grounds. Also, no campaign signage or transport of firewood to the campsite will be permitted.

About The Pokagon Band of Potawatomi Indians of Michigan and Indiana

The Pokagon Band of Potawatomi’s sovereignty was reaffirmed under legislation signed into law by President Clinton in September of 1994. The Pokagon Band is dedicated to providing community development initiatives such as housing, education, family services, medical care and cultural preservation for its more than 6,000 citizens. The Pokagon Band’s ten-county service area includes four counties in southwestern Michigan and six in northern Indiana.  Its main administrative offices are located in Dowagiac, Mich., with a satellite office in South Bend, Ind.  In 2007, it opened Four Winds Casino Resort in New Buffalo, Mich., followed by Four Winds Hartford in 2011, Four Winds Dowagiac in 2013 and Four Winds South Bend in January 2018.  The Pokagon Band operates a variety of businesses via Mno-Bmadsen, its non-gaming investment enterprise.  More information is available at www.pokagonband-nsn.gov, www.fourwindscasino.com and www.mno-bmadsen.com.