Football season kicks off this weekend 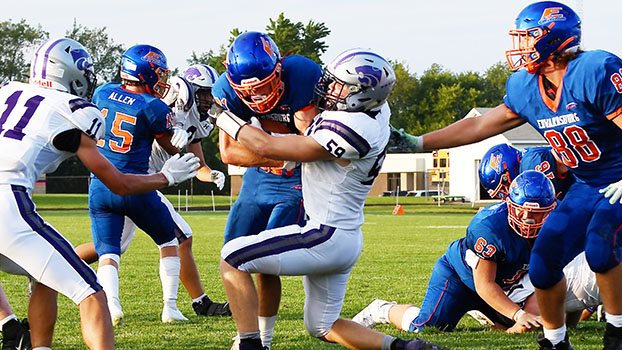 The highlight game of the week though will not be played until Friday night when No. 4-ranked Edwardsburg (Division 4) takes on No. 2-ranked Grand Rapids West Catholic (Division 6) at Hope College in Holland.

The Falcons are trying to adjust to their fourth head coach in the last eight years.

One player, the Eddies, will have to keep a close eye on is senior running back Tim Kloska, who is the all-time leading rusher for the Falcons. He committed to continue his career at Air Force this summer.

Other players who could figure into the outcome are running backs Carter Perry, Ryer Snow and Joe Debski. West Catholic is very deep at running back this season.

The Eddies, who reached the state semifinals for the sixth time in the last eight seasons, have some big shoes to fill due to graduation losses.

While the Falcons may be deep a running back, Edwardsburg lost several key players in its offensive backfield, including quarterback Jacob Pegura and running back Connor Ostrander.

Do not feel too bad for the Eddies as they return 27 seniors from a team that went 12-1.

A couple of key returners are senior running back Jacob Edwards and senior offensive linemen Will Jacobson and Brennen Brady-Brittain. Senior quarterback Zack Bartz, who got plenty of playing time last season, will miss part of the season after suffering a leg injury in the offseason.

Scot Shaw took over the Niles program in July, but quickly turned around the fortunes of the Vikings, who finished 5-4 and just missed making the playoffs by one spot.

Shaw hopes his young squad has matured enough to add a few more victories to the win column and reach the postseason for the first time since 2003.

Sturgis is hoping to continue to rebuild its program under Head Coach Chance Stewart, who was a standout quarterback for the Trojans.

Sturgis returns 19 of 22 starters from last year’s team that went 3-6. The Trojans are looking for their first winning season since 2015.

Niles will need to stop running back Jacob Thompson, who rushed for 748 yards and scored 10 touchdowns last season, while he caught 50 passes for another 736 yards and seven touchdowns. He was the Wolverine Conference’s unanimous Offensive Player of the Year.

The Bucks are trying to rebound from a disappointing 3-6 last season.

Buchanan is returning 17 of 22 starters from that team, including quarterback Connor Legault, running back Patrick Lavery, along with offensive linemen Owen Kutemeier, Drew Anderson, Dean Robers and A.J. Camille-Mcleod.

Bucks’ Head Coach Mark Frey, who enters his fourth season, said that Buchanan has improved its strength and speed over the summer.

The Trailblazers are coming off a 6-4 season, which ended in the Division 8 district championship game.

Kickoff at Memorial Field is set for 7 p.m.

Brandywine football kicks off a new era as Justin Kinzie takes over the Bobcats’ program following the retirement of Mike Nate following the 2021 season.

Kinzie comes over from South Bend Riley. He inherits a team that went 4-7 last season and lost several key players, including quarterback Blake Krueger and running back Ivory McCullough.

Brandywine does return some depth in the backfield at running back with Michael Palmer, Connor Sobecki and twins Brock and Conner Dye.

Kinzie said the key to success this season will be keeping players fresh as many will play both offense and defense and stay healthy.

The Panthers were 5-5 last season, reaching the Division 6 pre-districts before being eliminated.

Kickoff at Selge Field is scheduled for 7 p.m.

The Chieftains are trying to rebound from their first-ever winless season in 2021.

Second-year Head Coach Duane Davis hopes a year’s experience will help Dowagiac get back into the win column. He said the team has worked hard in the offseason to get physically and mentally tougher.

South Haven was 6-4 last season, qualifying for the Division 5 playoffs.

The Rams are hoping their experience backfield of Brady Dannenberg at quarterback, Xavion Harrington at running back and Justin Frazier at running back will help them make it three straight years in the postseason, something they have never accomplished.

Kickoff at Chris Taylor-Alumni Field is set for 7 p.m.

Despite low numbers, the Rangers qualified for the Division 8 playoffs for the ninth consecutive season.

Cassopolis had to cancel its junior varsity football program once again to have enough numbers to field a varsity squad.

The Rangers must figure out how to replace Jermaine Williams, D Jamison, R.J. Drews, Kendon Williams and Collin Bogue. All five players were key contributors on both sides of the ball for Cassopolis, which was 5-5 in 2021.

Logan Pflug, who splits time with the Rangers’ soccer team, is the only senior with significant experience. Cassopolis will be sophomore and junior heavy this season.

Allegan, a former member of the Wolverine Conference, has not had a winning season since 2010. The Tigers were 2-7 last season.

Kickoff at William F. Scott Field is scheduled for 7 p.m.