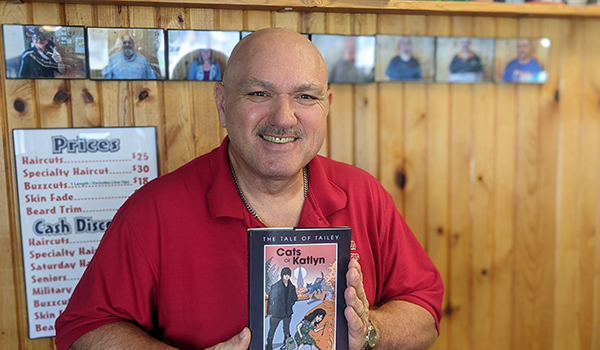 DOWAGIAC — What happens to a dream deferred?

Does it dry up like a raisin in the sun, or fester like a sore and then run?

Lennie Slack’s dream of being a published author may have been deferred 25 years, but unlike the Langston Hughes poem, he was able to turn that dream into fine wine.

Lenny Slack, under his pen name L.R. Slack, recently published his first book “Cats of Katlyn: The Tale of Tailey” with Friesen Press. The book is available for purchase online through Friesen Press, Amazon, Barnes & Noble, Booktopia and Walmart. Autographed copies can be purchased in-person at Bakeman Barbers, 101 S. Front St, where Slack has worked for nearly 40 years.

The fantasy story centers around Tailey, a cat who is transported to his home world of Katlyn and attempts to return to Earth to save his friend Megan from forces of evil from his homeworld. The book is the first of three planned for the Cats of Katlyn series.

The dream of writing books was instilled in Slack during his elementary school years.

“I remember I was reading a story about Daniel Boone and I thought I’d really like to write a book,” he said. “Later on, that desire just started to grow.”

Author L.R. Slack found a love for fantasy stories while serving in the navy, and earned a certificate from the Institute of Children’s Literature, as well as a Certificate and an Associates Degree in Computer Aided Drafting and Design.

“I like science fiction and fantasy,” he said. “When I was in the service, I had a lot of time to read. I’ve read a lot of fiction fantasy and I fell in love with that idea. That’s why I went into this.”

Slack wrote his first outline of Cats of Katlyn in 1997. The concept served as a bridge between his love of cats and dogs and his love of children’s literature.

That year, Slack sent a finished copy of the book to publications and was met with rejection letters. He shelved the project, and turned his focus toward raising his family. Even so, he never lost the itch to write.

“I put it on the shelf for 25 years,” he said. “I finally took it off the shelf, and like a new year’s resolution, I decided I was going to write it and get it going again.”

After sending out a revised edition, Cats of Katlyn was picked up by Friesen Press. When Slack held the first copy of his published work in his hands, he was overcome with emotion.

It centered me,” he said. “I always thought it would happen but then it happened. It was really overcoming there for a minute.”

Slack thanked his friends and family for the years of encouragement and support and acknowledged that many people close are a source of inspiration.

“I use my life to associate with it,” he said. “My family, people that I used to work with are represented in this. It’s where you get your work. It’s from you, your life, you know?”

While his dream hit a detour, Slack is thankful for the 25 years of experiences that shaped his book into what it is today.

“I just encourage anybody that wants to write, to write,” he said. “Do what you want to do because if you hold yourself back, you’ll be an old man waiting to do it. It’s hard to do it when you’re raising a family and trying to keep things going and then you finally get to where you want to be, but writing is just a really healthy experience.”