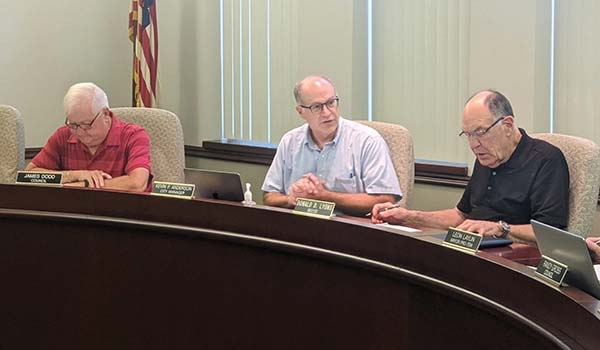 The Dowagiac City Council approved a resolution for the sale of land for an adult-use marijuana establishment Monday night. (Leader file photo)

DOWAGIAC — Five resolutions, including one to sell two pieces of property for a potential adult-use marijuana establishment, were approved by the Dowagiac City Council at its regular meeting Monday night.

At its first meeting since approving an ordinance that would allow retail cannabis dispensaries to operate in the City of Dowagiac, G2 Developments of Michigan LLC has offered to purchase two city-owned parcels of land along Pokagon Street and Amerihost Drive.

The first parcel would be purchased for $376,000, while the second would be purchased for $251,000, or a total of 627,000. G2 Developments has given the City of Dowagiac deposits of $15,000 and $10,000, respectively, in earnest money. That money is put into an escrow account, where it will remain until G2 Developments is approved for its license to operate an establishment by the City of Dowagiac.

The remainder of the money for the properties will be due at closing.

“What we found a couple of weeks ago is that several people have expressed interest in city-owned land to build some facilities on,” Dowagiac City Manager Kevin Anderson said. “So, we held a time for when people could bring those proposals in. It was at 9 a.m. on Friday so that council could take action. This is important to whoever is putting a permit together because what we have going here is that you have to have land secured in order to submit a permit.”

Anderson added that even though a permit is applied for, it does not automatically mean it will be approved.

“This doesn’t actually move us full to a sale, but it sets it up that it would be a sale if somebody brings in the appropriate permit and it is complete and it gets approval,” Anderson said.

Council members also approved a resolution for a Development Project Agreement with the Michigan Department of Natural Resources Trust Fund for improvements to Riverside Park.

Anderson said this project is a long time coming, but he is excited to finally be able to move forward with the project.

“This the last step we need to put in place so that we can go out to bid,” he said. “We had Wightman doing the design work for us, so for all practical purposes that is complete. Given the timing of when this grant agreement has come in, it really looks like our best bet is to bid this out in January for construction next year.

Anderson said that even though the city has its documents complete, they still have to go to the state for review.

“We are just going to run out of weather this year,” he said.

Thanks to federal, state and local money, the Dowagiac Municipal Airport will get new runway lights after the council approved a resolution Monday night.

According to Anderson, the Michigan Department of Transportation has received a block grant from the Federal Aviation Administration for airport development projects.

According to the Office of Aeronautics, Dowagiac is eligible to receive grant funds to help pay for the cost of designing a project that will improve and/or replace the runway lighting. The cost of the project is $38,500, of which Dowagiac would have to pay $573.00.

The other two resolutions approved by the council authorize the Anderson to execute a contract for the sale and purchase of real estate with Indiana Michigan Power Company.

The first resolution will allow the city to convert an easement that is currently in force with Indiana Michigan Power on Pokagon Street north of M-51 into a fee simple ownership.

Anderson said that this move is important as it would allow the city to possibly have that stretch of Pokagon from M-51 North to M-62 reclassified under the federal highway system. Although Anderson said there is no guarantee that it would happen, if that stretch of road would be reclassified, it would allow Dowagiac the ability to apply for grant money for resurfacing the road.

The second resolution with Indiana Michigan Power will grant an easement to the company in order to make underground electric service improvements on Division Street near Heddon Park.

All resolutions were approved unanimously.

The council also approve a request to hold the 2022 Black Family Celebration Sept. 2-4 at Walter Ward Park. The request was approved unanimously.

The council also approved the paying of bills and payroll in the amount of $524,203.47.