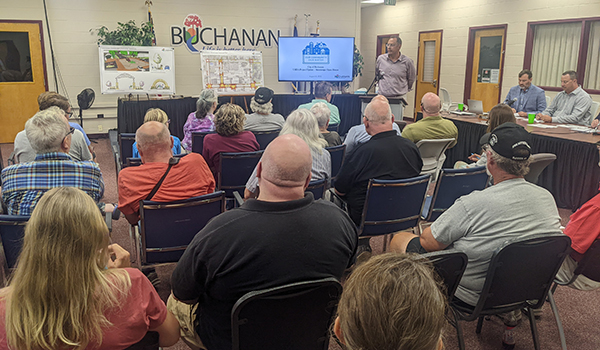 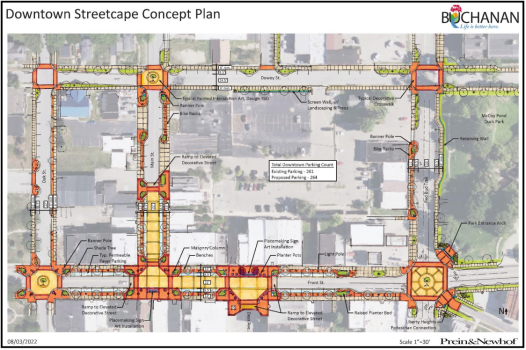 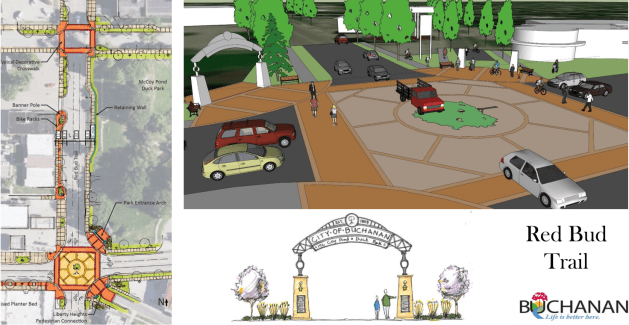 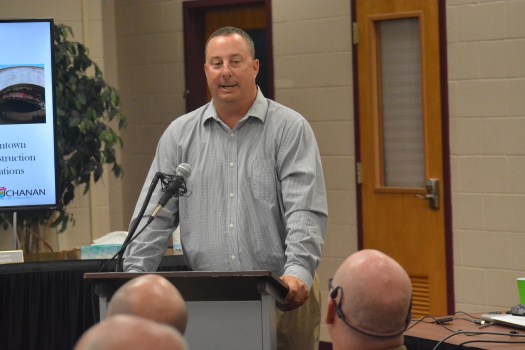 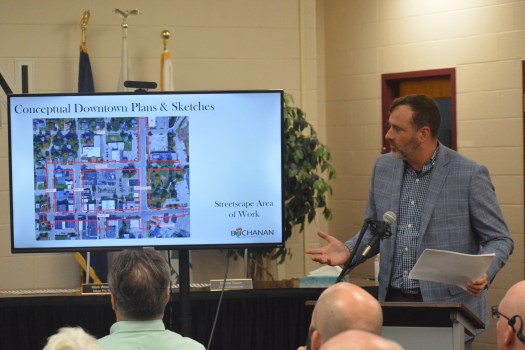 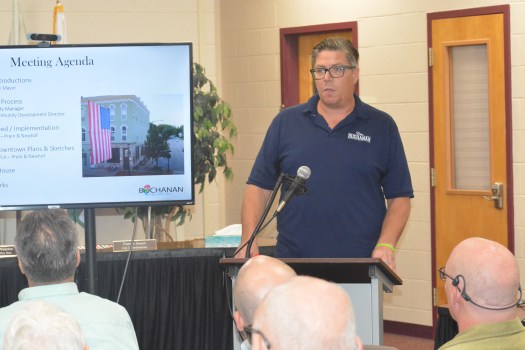 BUCHANAN — The City of Buchanan is gearing up to give downtown Buchanan’s infrastructure and streetscape a much-needed makeover.

The city hosted a Downtown Reconstruction Project public meeting Monday at City Hall, 302 Red Bud Trail. There, community members listened to a presentation from the City of Buchanan and Mike Schwartz and Matt Levandowski of engineering consultant firm Prein & Newhof, who presented those in attendance with mock-up sketches and designs of streetscape layout options for downtown.

With assistance from the city, Schwartz and Levandowski conducted a three-year infrastructure assessment from 2016 to 2018 that identified a critical need to update old water mains, storm sewers, and sanitary sewer infrastructure that runs under downtown and neighborhood streets.

“As many of you know, our infrastructure has outlived its productive point,” said Buchanan Mayor Sean Denison. “This is going to be a really important project for the City of Buchanan.”

Schwartz, the project’s lead engineer, and Levandowski, the landscape architect, brought their plan to the city planning commission earlier this year and was given the green light to move forward.

“If we’re going to fix the stuff under the downtown streets, the sewer water, we have to address the streetscape itself and put it back the way we love it and maybe a bit better than that,” Murphy said.

The city has secured significant funding – approximately $14 million – through the U.S. Department of Agriculture for the project, which will begin a phasing of the replacement of city sewer and water lines, as well as a new downtown streetscape. The project – which will feature the reconstruction of portions of Front Street, Dewey Street, Main Street Oak Street and Red Bud Trail – will require large portions of downtown to be closed to vehicular traffic for extended periods of time.

“As part of the infrastructure, we’re basically removing the roads, the driveways and sidewalks to get down to the sanitary sewers, the storm sewers and the water maintenance,” Schwartz said. “That’s why we’re doing new surface improvements because we’re ripping everything up to get to the utilities and put new stuff in.”

Downtown sidewalks will be widened to allow for improved pedestrian transportation. Benches, planter pots, banner poles and art installations will also be installed. While sidewalks will be widened, Levandowski said parking is an important factor in their plan. To allow for more parking on Red Bud Trail, Prein & Newhof is proposing reducing the number of lanes from four to three, starting at Third Street.

“I guess I think parking problems in a downtown area are a good problem to have,” he said. “It means people are coming, people love visiting when you’ve got all this investment into the downtown and you’re going to find that more investment starts to come in and people they’re willing to walk four, five, six blocks to go to your business because the space is so engaging.

“Our goal was to increase parking downtown and we feel we can do that,” Levandowski said. “It doesn’t mean that maybe on one section of the street that the parking count went down by two but around the corner, it went up by four.”

Levandowski and his team spent significant time pouring over the history of Buchanan and aim to incorporate the past into the downtown’s future. For example, a proposed entrance arch into McCoy Creek Duck Park will feature two large axles inspired by Clark Industries, which produced axles during the World War II effort.

“I thought that’s a cool way to honor the history here,” he said. “That idea of honoring the history through architecture will be incorporated through the downtown in other ways, to, but that’s just one way we can consider doing it here.”

“I do believe that to get the pedestrian space that is really going to activate the downtown, it is important to make sure that you’re physically prioritizing people over cars,” Levandowski said. “One of the goals of this space is to make downtown feel more for people than for cars.”

According to Levandowski, the engineering team is able to do this because the lane widths are not restricted by MDOT. The city has control over the width of its roads.

“What we’ve been told is let’s make it a little bit less friendly on big trucks,” Levandowski said. “We still need to get deliveries there but let’s try to slow the cars down so people can cross the street and not worry.”

Schwartz said his team is hoping to begin construction in 2023 and complete the project in 2025. The city, Schwartz and Levandowski have begun initial discussions on project design and streetscape and wanted to engage the residents of Buchanan to receive their ideas and feedback on this important project.

Scwartz and Levandowski recently completed a similar project in the City of Vicksburg.

“They just went through this entire process,” Murphy said. “When I asked them what they had learned about that process that they could bring to us, the number one theme was don’t sugar coat it, it’s going to be a challenge. So we’re going to have to communicate, we’re going to have to address problems proactively and keep our tempers and look at the prize, the prize is going to be new infrastructure. The prize is going to be amazing improvements. We love it the way it is. Let’s put it back the way it is but a little bit better. So that’s our goal.”

Monday’s open house was the first of many planned public forums regarding the reconstruction plan. The city and Prein & Newhof aim to take the community feedback and incorporate it into the final drafts.

Dennison urged the community to be patient as the project unfolds.

“It’s going to be difficult,” he said. “I’m not going to sugar coat it, it’s going to be really difficult to close down downtown for an extended amount of time but I look at it as an opportunity to rebuild the city the way we want and to leave it for our kids and our grandkids. I think it’s such an exciting opportunity to leave all of our handprints downtown.”