CASSOPOLIS — Mary Tharp has made herself right at home in the Cass County Fair Youth Dairy Show ring.

The victory capped a busy morning of competitions for Tharp. She had placed third in the lamb showmanship senior division just moments before the diary show began.

“It was intense,” she said. “It was really hard to switch mindsets. I just made sure to take a deep breath.”

As part of the judge’s evaluation process, the judge had contestants briefly switch animals in order to test their knowledge.

“I have to know the biggest difference between their cow and my cow,” she said. “Whether it’s a heifer, or if it’s a cow, what’s wrong with it, what its strengths and flaws are. I walked around the cow and found what I liked.”

Tharp has been showing in the fair since she was six years old. While she is sad that it will come to an end, she looks forward to making this year’s fair a fair she will not soon forget.

“I’m just really excited,” she said. “I’ve worked all winter and summer for this. I’ve been traveling, showing and trying to get as much exposure as I can. I’m just really happy right now.” 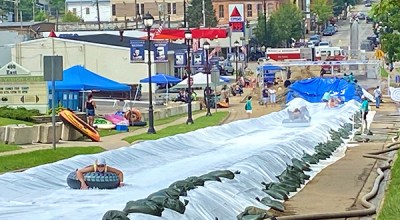