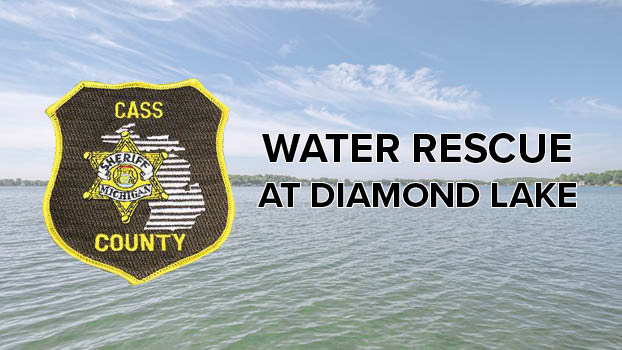 CASSOPOLIS — The Cass County Sheriff’s Office had to perform a water rescue after a passenger was ejected from a boat on Diamond Lake Tuesday.

Deputies responded to the south end of Diamond Lake at 10:46 a.m. where an investigation found that Bruce McCartney, 74, of South Bend, Indiana, was operating his 16-foot Lund boat near Diamond Island’s ferry, when he crashed into a Nitro fishing boat.

The Nitro boat was occupied by owner Gene Delaforet, 70, of St Joseph and passenger Richard Knapp Jr, 73, of Three Oaks.

McCartney’s passenger, Robert Schmitt, 86, of South Bend, was ejected from the boat and unconscious in the water. McCartney’s boat remained under power and circled Delaforet’s boat multiple times until McCartney could regain control of the boat.

Delaforet and Knapp then pulled Schmitt from the water. McCartney’s boat was slowly taking on water because of the crash. A Cass County Marine Unit arrived on scene and assisted getting the subjects and boats back to shore where Schmitt was treated for his injuries.

Personal floatation devices were available on board both vessels, but were not used at the time of the accident. This accident remains under investigation and alcohol was not a factor in the crash.

Cass County Deputies were assisted on scene by nearby residents, the Penn Township Fire Department and Pride Care Ambulance.