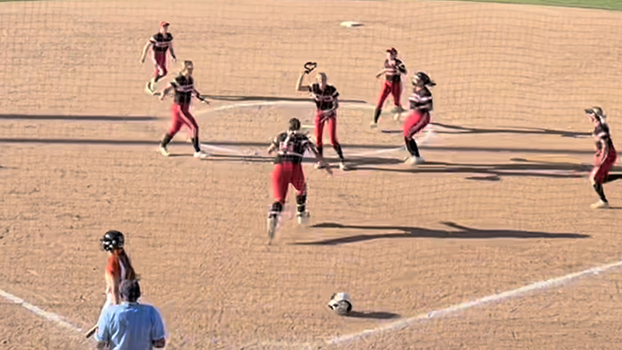 EAST LANSING — Three years ago Escanaba got the upper hand on Lakeshore in the Division 2 state championship game.

The two teams looked to be back on a collision course for the state title in 2020 before COVID-19 derailed the season. This year, the Lancer seniors were able to exact revenge on Escanaba with a 2-1 win in the Division 2 state semifinals Thursday.

Lakeshore opened the first inning with a Gianna Kerschbaum walk, and moved to third on two wild pitches. Kerschbaum was able to beat the throw home on a fielder’s choice ground ball by Anna Chellman to the Lancers a 1-0 lead.

Ava Mullen was once again in the circle and the Michigan State verbal commitment pitching on her future home field looked very comfortable already. She struck out 10 Eskimos in 5 and two-third innings, allowing a single run on two hits.

The 10 strike outs are second most strike outs by a Lancer in a semifinal game. Amber Castonguay struck out 11 in 1998 in a 1 hit domination of Dewitt. Avery Arwood pitched the last inning and one-third innings, inducing a pop out on her first pitch to end the sixth and then struck out the side to finish off the Eskimos in the seventh.

After giving up the lone Eskimo run in the sixth, Lakeshore went right back to work in the bottom half if the frame.

Gabby Solloway opened the inning with a single to right field. Solloway moved to second on a ground ball by Anna Chellman that the Eskimo short stop misplayed. Eden Gray came up next and did her job moving the runners to second and third on the sacrifice bunt. Pallas Dominion was hit by a pitch in the next at bat to load the bases.
On the next pitch, Gabby Solloway scampered home on a wild pitch to score the go ahead and eventual winning run.

Lakeshore now takes its 39-4 record into the state finals at 12:30 p.m. Saturday at Michigan State. The Lancers will face Trenton, which was a 2-1 winner over Essexville Garber in the other semifinal. Trenton finished the regular season honorable mention to the top 10.  It will enter the game with a 32-11 record on the season.

Lakeshore will be looking for a state record eighth championship.

Tickets for the championship game must be purchased on gofan.co  Search Lakeshore High School.