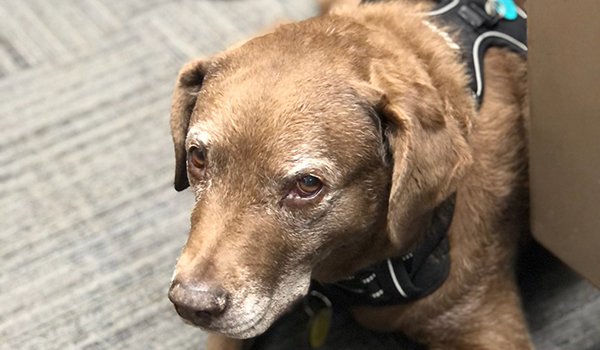 NILES — It was the start of a new era Monday morning at Niles High School.

Carrie Rinehart, Derby’s owner and high school guidance counselor, said Derby will be missed by all.

“It’s been amazing,” she said. “The staff loves her. The kids love her. There are some kids that come in specifically asking for her. She has kids who feel like she’s their dog, and then there’s other kids that come in and don’t even realize she’s here, necessarily, but who are very upset, and so before they get ready to talk and share, we will be like ‘do you want to just sit here with Derbs’ and they end up sharing without even realizing it because she’s just a calming and she’s non-judgmental.”

Friday, June 10 was Derby’s last day roaming the halls of Niles High School. According to Rinehart, the day was met with much fanfare. Students and staff greeted her in the halls and the Niles High School Marching Band gave her a sendoff performance.

“We’ve had a couple retirements the last few years and the band will come out and play the fight song for the retirees,” Rinehart said. “Our band director was like ‘we need to do that for Derby’ and so they did.”

Rinehart said that Derby’s tenure with the high school began roughly five years ago when Molly Brawley, the high school principal at the time, approached her about having a therapy dog in the building.

According to the Alliance of Therapy Dogs, The most important characteristic of a therapy dog is its temperament. A certified therapy dog must be friendly, patient, confident, gentle, and at ease in all situations. Therapy dogs must enjoy human contact and be content to be petted, cuddled, and handled, sometimes clumsily, by unfamiliar people and to enjoy that contact.

“She showed me an article that was about therapy dogs in schools,” Rinehart said. “It was mostly about elementary kids and the fact that if you have a certified therapy dog, you take them in. It helps reading levels and the article went through all the physiological positive things that happen when anybody touches or pets the dog. She always wanted to have a dog in a building and I doubted it was ever gonna happen.”

Around the same time, Rinehart welcomed Derby into her home. It was not long before she felt that Derby would make a great addition to the school as a therapy dog.

“It was really just about her demeanor,” she said. “Very quickly, as I got to know her, I realized that she would probably fit very well into this program.”

After completing her certification, Derby began therapy work in February 2017. Rinehart said originally, Derby would come with her to school every day but since turning 13 in January, she only attended school Tuesdays and Thursdays.

“She started really slowing down,” she said. “(On Thursday) I just announced she was retiring. Now she can stay home and just nap as much as she wants.”

It did not take long for Derby to become a beloved member of the NHS family.

“Everybody knows that she’s here,” she said. “She sits out there, you just have to step over her sometimes. Our secretary,Angie, just took her out to go to the bathroom. It’s a team effort and it’s very special. It will be hard because we’re very used to it.”

While Rinehart will still see Derby every day at home, not having her partner in crime at the high school with her will take some getting used to.

“I’m the one going home with her but by the end of the band performance, (I was in tears) because I will miss her being here,” she said. “I love how she loves our kids, I love how she loves our staff. I love that they give her all the love in the world. Literally, if dogs lived on love, that dog would never die. She’s very special.”