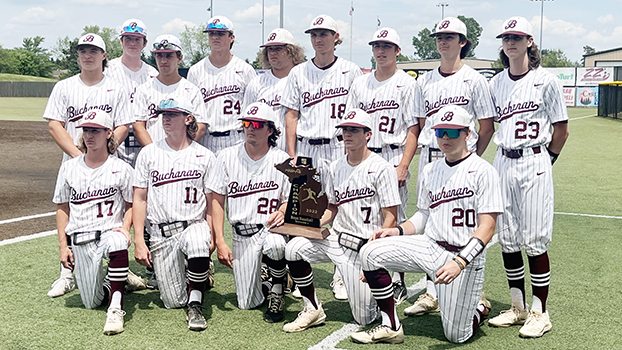 No. 1 Buchanan blanked Onsted to win its second straight Division 3 Regional title and then shutout Clinton in the quarterfinals to earn a return trip to East Lansing. (Submitted photo)

ADRIAN — The domination of the No. 1-ranked Buchanan baseball team over its opponents continued Saturday.

How dominant where the Bucks win, defeating No. 11-ranked Onsted 10-0 in five innings to win their second straight Division 3 Regional championship and then shutting out No. 12 Clinton 12-0 in the quarterfinals to advance to the Final Four at Michigan State University next weekend?

Not only did Buchanan outscore their two opponents at Adrian College Saturday 19-0, it outhit them 22-5. The Bucks’ pitchers combined to strike out 20 while walking only a pair. In its five tournament games to date, Buchanan has outscored its opponents 52-4.

Having not pitched in the regional semifinals against Climax-Scotts, Buchanan ace Matthew Hoover was fresh for Saturday. He took full advantage as he worked the first two innings against Onsted and five innings against Clinton. In those seven innings of work, Hoover, who will attend Western Michigan University on a baseball scholarship, allowed two hits. He struck out 16 and walked two.

Hoover helped himself out at the plate as well, as he went 5-for-5 with a double and two RBIs against Clinton, while he was 2-for-3 against Onsted.

Against Onsted, Preissing was 2-for-3 with a triple and two RBIs, while Murphy Wegner was also 2-for-3 with a pair of doubles and three RBIs. West also had a pair of hits. Hunter Carrington drove in a pair of runs for the Bucks.

With the two wins, Buchanan (28-4) advances to the Division 3 semifinals for the second consecutive year. The Bucks will face Standish-Sterling (21-4), who defeated Traverse City St. Francis in the quarterfinals 11-0 Saturday afternoon. Buchanan and Standish-Sterling will play the second game at McLane Stadium at Michigan State University at 5 p.m. Friday.

In the first game, Detroit Edison, who knocked off defending state champion University of Liggett, the team that eliminated Buchanan in last year’s semifinals 2-0, will take on Pewamo-Westphalia in the first semifinal Friday. That game is scheduled to begin at 2:30 p.m.

The championship game is scheduled for 5 p.m. Saturday at McLane Stadium.