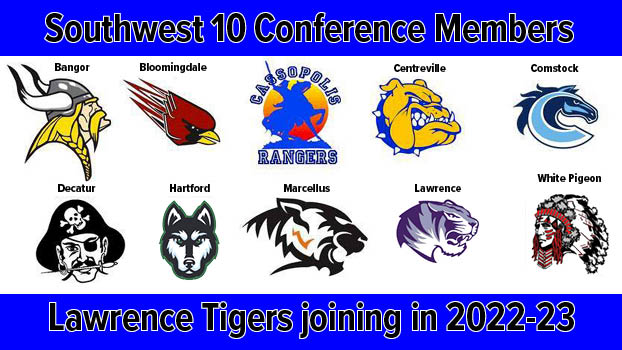 CASSOPOLIS — Changes are coming for the 2022-23 Southwest 10 Conference season.

Mendon, which switched to eight-man football last fall, is leaving the Southwest 10 to become a member of the Southern Central Athletic Conference after next season. The Hornets will join its new conference in the fall of 2023-24.

Meanwhile, Lawrence, currently a member of the BCS Athletic Conference, will join the Southwest 10 beginning in the fall.

The BCS Athletic Conference is also losing Brandywine, Buchanan and Berrien Springs, which are leaving the league to join Benton Harbor and Dowagiac in the newly formed Lakeland Conference, was well as Bridgman and South Haven, which are both leaving to join the Southwestern Athletic Conference.
The Bees and Rams will be joining Coloma, Constantine, Delton-Kellogg, Fennville, Galesburg-Augusta, Gobles, Kalamazoo Hackett, Kalamazoo Christian, Lawton, Martin, Parchment, Saugatuck, Schoolcraft and Watervliet in the SAC.