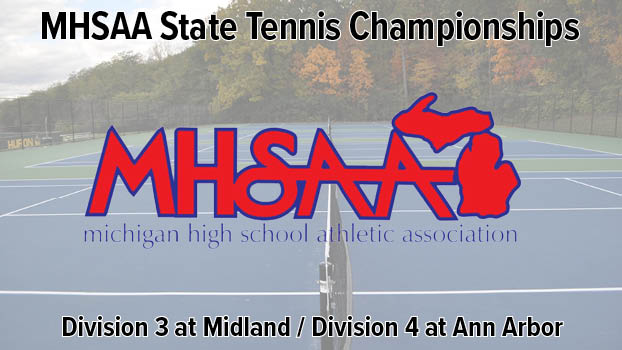 Brandywine’s No. 1, 2 and 4 doubles teams all reached the quarterfinals before being eliminated.

In the first round, Brandywine’s Jessica Williamson defeated Midland Bullock Creek’s Hillary Anderson in the opening round at No. 1 singles 6-1 and 6-2.

Hannah Earles defeated Elizabeth Gladstone, of Royal Oak Shrine Catholic, 7-5 and 6-1 at No. 2 singles, while the Bobcats’ Mari Allen was defeated in three sets by Frankenmuth’s Katie Hetzner 6-4. 4-6 and 6-4 at No. 3 singles.

In doubles, the Bobcats’ No. 1 team of Abbie Hubbard and Emma Hinsey received a first-round bye, as did the No. 2 doubles team of Tressa Hullinger and Hope Typer.

In the second round, Hullinger and Typer defeated Royal Oak Shrine’s Kennedy Scher and Babby Cormier 6-1 and 6-3.

At No. 3 doubles, Chloe Sidenbender and Dani Holden defeated Tori Maynard and Ellyanna Carmer, of Ovid-Elsie, 6-2 and 6-3. Brandywine’s No. 4 doubles team of Abagail Solloway and Isabelle Sosnoski received a first-round bye.

Edwardsburg finished with three points in the Division 3 state tournament in Midland.

The Eddies’ No. 3 singles player Eucris Ugay advanced to the quarterfinals before being defeated by Lakeshore’s Josie Arbanas 6-1, 6-0. Ugay received a first-round bye. At No. 4 singles, the Eddies’ Julia Jones lost to Otsego’s Sidney Morris 6-1 and 6-1.

In Division 3 at Midland, Edwardsburg’s No. 1 singles player. Leah Hosang defeated Armada’s Holland Hall 6-1 and 6-2 in the opening round, but was defeated by East Grand Rapids’ Allie Toi in the second round, 6-1 and 6-3.

In doubles matches, Edwardsburg’s No. 1 team of Channing Green and Mackenzie Schaible were defeated by Grand Rapids Christian’s Marissa Sullivan and Ashley Wolfe, 6-2 and 6-1. At No. 2 doubles, the Eddies’ Delaney Haradine and Leah Stern defeated Whitehall’s Lacey Herberet and Autumn Ferris 6-3, 4-6 and 6-2 in the opening round, but lost to Bloomfield Hills Marian’s Megan Sharkey and Emily Anton 6-3 and 6-0.

Edwardsburg’s No. 3 doubles team of Katie Schaible and Ella Castelucci were defeated by Williamston’s Annelise Jeitschko and Abigail Eyke, 6-4 and 6-2. The Eddies’ No. 4 doubles team also lost in the first round as Mackenzie Vargo and Zoe Wimberley were beaten by Ludington’s Sarah Gibson and Emilie Phillips 6-0 and 6-0.