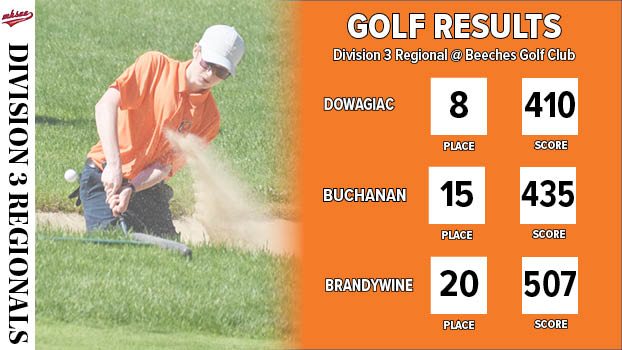 After playing well on the first nine holes at Beeches Golf Club in South Haven, the Chieftains struggled in the second half of its 18-hole round and finished eighth overall.

The top three teams — Coloma, Schoolcraft and Olivet — advanced to the Division 3 State Golf Finals at The Fortress in Frankenmuth June 10-11. The top three individuals, not on a qualifying team, also advance to the finals.

Coloma won the regional championship with a score of 364, which was one shot better than runner-up Schoolcraft, which shot 365. Olivet finished third with a 370.

“We started out pretty good playing on the back nine, which is actually the tougher side, it has more hazards, but then we started slipping up a bit on the front side,” said Dowagiac Coach Bob Turner. “It is a little more open, but the wind had picked up a lot.”

“Abraham Guernsey played really well, he had one bad hole, but his 90 is still a good score,” Turner said. He was 11th out of 100 players.”

Turner is already looking forward to next season.

“We have everyone coming back next year and the guys are committed to tournaments over the summer to get us ready for next year,” he said.

Miles LeMere was the top Brandywine finisher as he shot 108. The Bobcats also got a 125 from Robert Dillard, a 134 from Shaun Wixson, a 139 from William Hayes and a 153 from Carson Knapp, who did double-duty Tuesday as he also played in the Division 3 Pre-District Baseball game against Buchanan in the afternoon. 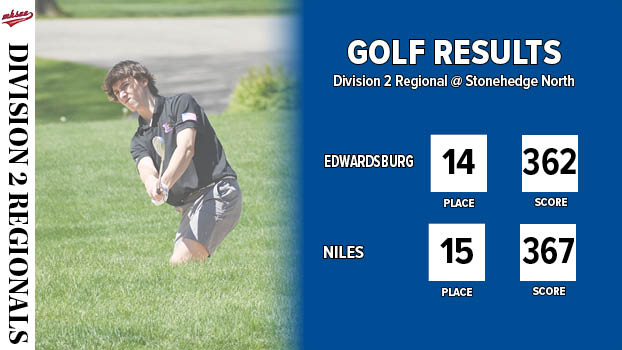 Edwardsburg and Niles did not advance out of the Division 2 Regional at Stonehedge North in Richland Tuesday.

Gull Lake was the regional champion with a 314, while Mattawan was second with a 322. Vicksburg and St. Joseph tied for third with a 330.

Evan Bruckner finished with an 88 to lead the Vikings, who also got a 91 from Aiden Krueger, a 92 from George Pullen, a 96 from Kade Delinski and a 99 from Dakota Schneider.