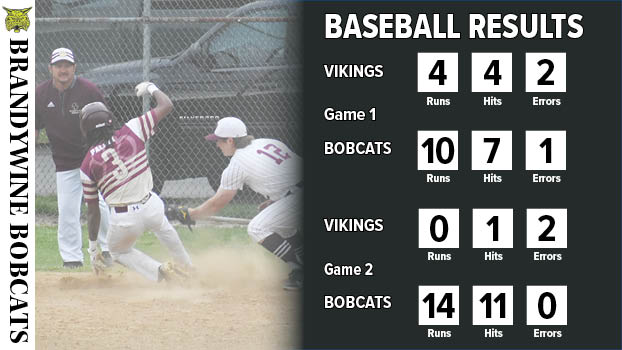 NILES — Host Brandywine swept Bronson in baseball, while the Bobcats split with the Vikings in softball Thursday afternoon.

In other action, the Edwardsburg baseball team blanked visiting Elkhart to improve to 19-2 on the season.

Tyler Deming picked up the win in relief of starter Matt Veach in the opener. Jeramiah Palmer also took the mound for Brandywine and helped the trio toss a four-hitter.

Jamier Palmer had two hits and two RBIs for Brandywine, while Deming drove in two runs.

Brandywine jumped out to a 4-0 lead after one inning against Bronson in the nightcap. The Bobcats scored eight runs in the bottom of the fourth to end the game due to the mercy rule.

Jamier Palmer tossed a one-hitter to earn the victory. He struck out six.

Brandywine banged out 11 hits in the game, led by Tyler Deming, James Barnes, Andrew Schadler and Drew Deming, allo of whom had two hits. Jeramiah Palmer and Schadler both drove in three runs.

Host Brandywine won the opening game 11-10 on a walk-off single by Kadence Brumitt.

Bronson rebounded to win the second game, 16-14, as it scored five runs in both the fourth and fifth innings to erase a 13-6 Bobcats’ advantage.

In the opener, Mason singled to open the bottom of the seventh and moved into scoring position when Paige Krisher grounded out to the pitcher. Brumitt singled to left field on the first pitch to drive in the game-winning run.

Adelyn Drotoz picked up the win.

In the nightcap, the Bobcats, who scored 10 runs in the fourth inning, but could not hang onto the lead, finished with 15 hits.

Parker was 3-for-4 with a pair of doubles for Brandywine. Krisher and Scott both hit three-run home runs. Julie Babcock was 3-for-4.

Caleb Layman tossed a one-hitter to earn the win for the Eddies, who improved to 19-2 overall.

Edwardsburg’s 13-hit attack was led by Patrick Szlanfucht, Logan McColley and Connor Ostrander, who had three hits apiece. McColley drove in four runs and Ostrander two. Layman helped his own cause with a pair of hits.

Ostrander doubled and homered for the Eddies, while Szlanfucht had a double. Logan McColley had a pair of hits — a triple and a home run.