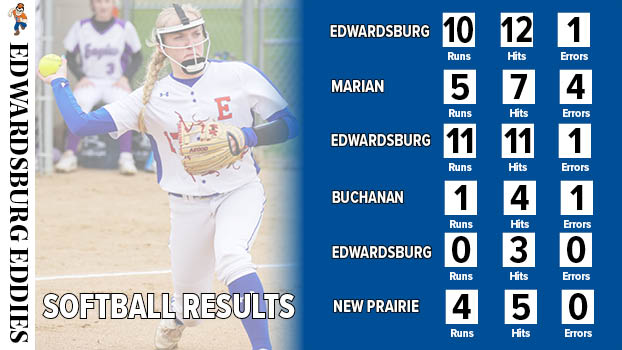 The tournament, organized by Clay Coach Katie Rodriquez raised more than $10,000 this past weekend for the Beacon Children’s Hospital Pediatric Hematology/Oncology unit.

Rodriquez’s son Gabe was diagnosed with leukemia in 2015 when he was 2 years old.

The Bucks were 1-2 having also lost to host South Bend Clay 2-1 and defeating Concord 11-1.

At the River Valley tournament in Three Oaks Saturday, Brandywine reached the finals before falling to Hamilton 12-1. The Bobcats reached the title game by beating host River Valley 2-0 and Fennville 17-0.

Dowagiac was 2-1 in Three Oaks as it defeated Decatur 7-4, lost to Hamilton 4-3 and defeated River Valley 4-3.

Against Marian, the Eddies used a seven-run sixth inning to erase a 5-3 deficit.

Samantha Baker picked up the victory in relief of starter Averie Markel and Jersie Dawson, who also pitched in relief.

Edwardsburg finished with 12 hits, led by Markel, who had three hits, and Lexi Schimpa two.

A six-run fifth inning propelled the Eddies to their win over No. 6-ranked Buchanan.

New Prairie scored three times in the second inning and added a run in the sixth to pick up the win.

The Eddies were held to three hits by Ava Geyer. Abby Bossler had a double.

Edwardsburg is now 19-7 on the season.

The Bucks scored first against Clay, but the Colonials tied the game at 1-1 in the third and scored the winning run in the bottom of the sixth.

Against Concord, the Bucks (24-5) scored five runs in the third and then added four in the sixth to turn the game into a rout.

Haley Scott tossed a one-hitter and Presley Gogley a two-hitter as the Bobcats blanked River Valley and Fennville.

Against the Mustangs, Paige Krishner and Julia Babcock both doubled and scored a run for the Bobcats. Scott struck out seven.

In the Fennville game, Chloe Parker doubled and drove in three runs. Ireland Prenkert had a pair of hits.

In the championship game against Hamilton, Brandywine was held to four hits.

Dowagiac has been battling inconsistency this season, but played well in all three games Saturday according to Coach Mike Behnke.

“We played some pretty inconsistent softball this week,” he said. “We would play good softball the first game and then be mentally out of it the second game. One positive I can say is we battled from behind in the games we lost and had the tying run in scoring position each time. Hopefully two wins at the River Valley tournament, and a tough fought loss against a very good Hamilton team will give us some momentum going into next week.”

In the opener against Decatur, Caleigh Wimberley, Aubrey Busby and Sierra Carpenter all doubled.

In the loss to the Hawkeyes, the Chieftains trailed 4-0 heading into the sixth inning. Dowagiac scored three runs, but could not push the tying or winning run across the plate. The game was stopped after sixth innings due to the time limit.

The Chieftains (11-6) rebounded to defeat the host Mustangs in the final game of the day.

Carpenter tossed a two-hitter to earn the victory.

Rebecca Guernsey had a double to lead Dowagiac offensively.