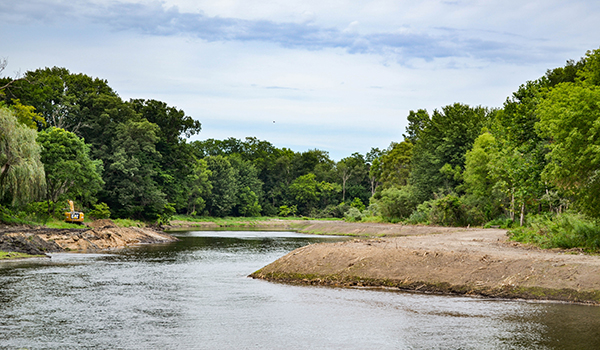 NILES CHARTER TOWNSHIP – An emergency water rescue involving several kayakers on the Dowagiac River last week brought the potential dangers of the river back to the forefront.

According to NTFD Lieutenant Marc Brandon, dispatch sent emergency crews to an address on Creek Road near the river based on coordinates from cell phone data. The kayakers were found hanging onto a log approximately 150 yards north of Kinzie Road after setting off from Arthur Dodd Memorial Park.

“We couldn’t see them from the road because the creek meanders and turns,” he said. “I sent a couple guys on foot through the woods and they found them.”

Personnel were able to pull everyone to safety and no injuries were reported.

“They grabbed onto a log and were just sitting there floating,” Brandon said. “One of the kids had been dragged under the water but they got him back out. Everybody was fine.”

“It’s almost always the same thing, there’s just a lot of debris in it,” he said. “The kayakers are usually not the most experienced and don’t know how to handle those situations and it gets out of control.”

The news did not surprise Neil Keller, owner of Doe-Wah-Jacks Canoe Rental, 52963 M-51, Dowagiac. Keller, who has traversed the river for years both as a hobby and for work, knows the pitfalls that can befall unsuspecting or inexperienced kayakers and canoers.

“They straightened the river out from Decatur down to Arthur Dodd Memorial Park more than 100 years ago,” he said. “The section below Arthur Dodd has all of the old meanders [curves in a river channel]. The log jams down there are treacherous and the water can be quicker down there. You get in those big [river] bends and if the log jams are built up, you need to stay back away from someone if they’re trying to get through the opening.”

Keller recommends that rivergoers always wear a floatation device and to not enter the river alone.

“A lot of people don’t know their limits out there, which is half the battle,” he said. “They think this is a big, wide open river and it’s not; it’s narrow and can be really swift when the water level is up. If people are on their own, stay cautious and know your limits. I get a lot of people who have been on the river before and even they’ll go out and tip over once or twice. It’s a whole different ball game for them.”