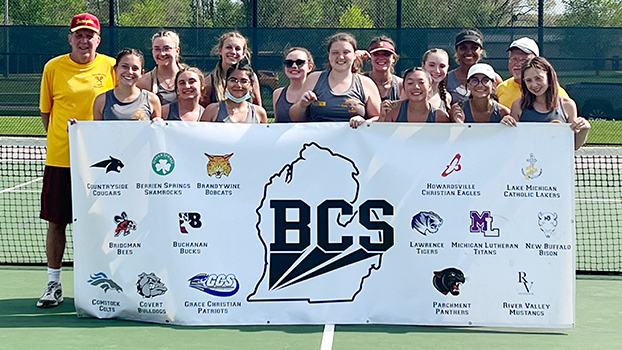 The Brandywine tennis team won its ninth consecutive BCS championship, and its 14th in the last 17 years. (Submitted photo)

The Bobcats kept their win streak going as they edged Buchanan 47-41 at the BCS Tournament hosted by Berrien Springs Thursday. Brandywine has now won 14 league titles in the past 17 seasons and is the only team to have won the BCS girls tennis championship.

Brandywine won seven of the eight flight championships. The only flight the Bobcats did not win was No. 1 singles, where Jessica Williamson had to withdraw due to the heat. At the time, Williamson had won the first set over Buchanan’s Oliva Paturalski 6-2, but was trailing 5-4 when she withdrew.

“Just a great team effort from our entire team as the later you played into the afternoon, the more the hot and humid weather became a factor,” said Brandywine Coach Joe Marazita. “To come away with seven flight champs was great, and we almost swept, but Jessica after having easily won her first set 6-2, was then unfortunately overcome by the heat and with advice from the trainer, we defaulted her in the second set.”

Marazita was also pleased with the efforts of Earles at No. 2 singles and the play of Hullinger and Typer.

“Hannah just cruised by only losing two games all day, and Tressa and Hope also played really well at No. 2 doubles in avenging an early-season loss to Buchanan. And it was really cool for Brandywine to host the first two rounds of singles on our new courts.”

The Bobcats were 5-0 in dual matches, while the Bucks were 4-1. South Haven was 2-2-1, while LMC/Bridgman was the only other team two win matches in conference play this season. The Lakers, who are now representing Our Lady of the Lake, was 2-3.

South Haven finished third at the conference tournament with 24 points. The Lakers were fourth with 22 points, Berrien Springs fifth with 20 and New Buffalo sixth with 14.

Brandywine now sets its sights on preparing for the postseason.

“Myself, Coach [Rich] Robbins, and Assistant Coach Caitlin Stanner are very proud of how well our entire team fought and supported each other on a very long and hot day,” Marazita said. “With this performance, it will cement us having all eight flights seeded in regionals, which I hope will allow for us to advance to the state finals. We will be challenged on Monday by playing one of the top teams in the state as we will play at North Muskegon, which should also prepare us well for regionals.”