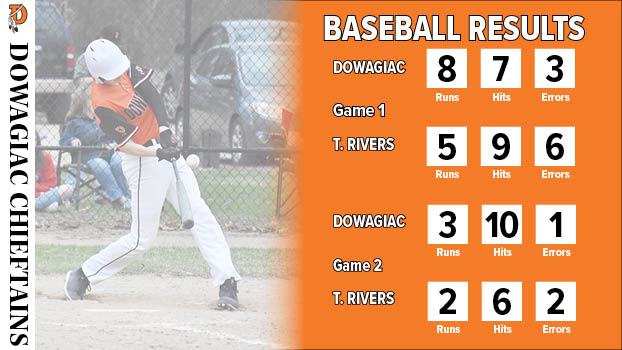 At Otsego, Niles dropped a pair of conference contests to the Bulldogs, 3-1 and 10-9.

The Chieftains have put together a three-game winning streak with the sweep of Three Rivers.

In the opening game, Kanyon Binns was 2-for-4 with an RBI for the Chieftains. He also picked up the win on the mound as he pitched five and two-third innings and recorded six strikeouts.

In the nightcap, Mason Maggert earned the win as he worked six innings before giving way to Henry Weller, who also pitched in the opening contest.

Ethan Hannapel and Kanyon Binns both had two hits for the Chieftains.

Dowagiac is now 7-8-1 overall and 3-7 in Wolverine Conference games. Three Rivers is also 3-7 on league games.

The host Bulldogs improved to 10-4 overall and 8-0 in conference contests with the sweep of the previously undefeated Eddies.

Tyler DeVries picked up the win in relief in the opener as Vicksburg scored four times in the bottom of the sixth to erase a 2-1 deficit.

Edwardsburg (12-2, 8-2 Wolverine) had seven hits in the contest, led by Logan McColley with three hits and Connor Ostrander with two hits and three RBIs.

In the nightcap, an eight-run sixth inning helped the Bulldogs build up a 10-1 advantage on the Eddies, who scored four runs in the top of the seventh, but could not overcome the deficit.

Sam Bronkema hit a walk-off, two-run home run to give Otsego the victory in the opening game.

Bronkema was also the winning pitcher as he tossed a two-hitter.

Talon Brawley had a double for the Vikings, who drop to 4-15-1 overall and 3-7 in league games.

A three-run bottom of the seventh in the nightcap allowed the Bulldogs to rally for the win.

Niles had 12 hits in the game, led by Austin Bradley, who was 3-for-3 with an RBI. Carson Rachels was 2-for-4 with a double and an RBI.