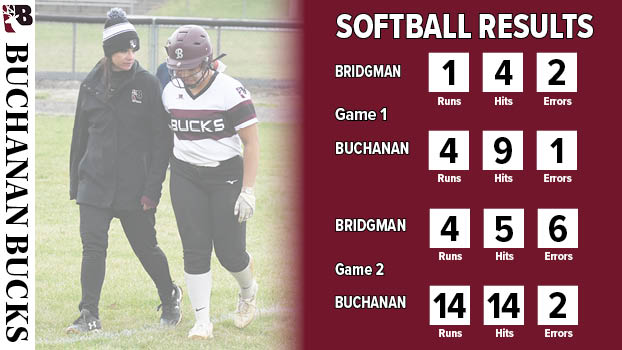 In the Wolverine Conference, Dowagiac defeated Three Rivers 13-5 in the first game, while the nightcap was suspended after seven innings tied at 5-5 due to darkness. Also, in conference action, Edwardsburg swept host Vicksburg 5-4 and 13-3, while Niles split with Otsego, winning 8-3 and losing 7-6.

Hailee Kara tossed a four-hitter with 10 strikeouts to lead the No. 6-ranked Bucks to the win in the opening game.

Camille Lozmack, Alea Fisher and Alyvia Hickok all had two hits for Buchanan.

In the second game, Lozmack scattered five hits to earn the victory.

The Bucks (21-3) finished with 14 hits. Hannah Herman had three hits and four RBIs and Horvath Caitlin also had three hits for Buchanan. Lozmack, Hailee Kara and Hickok all had two hits.

In the opening game, the Chieftains played long ball against the Wildcats as they had seven doubles.

Caleigh Wimberley was 3-for-4 with a pair of doubles and two RBIs to lead Dowagiac, which also got a 3-for-4 performance with a double and three RBIs from Rebecca Guernsey. Lyla Elrod and Rylee Hudson also had doubles.

Dowagiac jumped out to a 5-2 lead on Three Rivers in the nightcap, but could not maintain the momentum, in part to seven errors.

The Wildcats scored two in the fourth and one in the bottom of the seventh to tie the game. Officials then deemed it was too dark to continue play.

The Chieftains (8-4) had five hits in the second game, including a double by Wimberley and a home run by Aubrey Busby.

Carpenter started the game and worked six innings, allowing two earned runs on six hits. Rebecca Guernsey came on in the seventh for the Chieftains.

Trailing 4-0, the visiting Eddies scored three runs in the sixth and two more in the seventh to win the opening game.

Caitlin Tighe singled in the tying run in the seventh and Abby Bossler then tripled to drive in Tighe with the winning run. They both finished the game with two hits. Lexi Schimpa had a home run.

In the nightcap, Edwardsburg (15-6) outscored Vicksburg 8-2 over the first three innings and then cruised home with the win in the nightcap and a sweep of the doubleheader.

Lindsey Dalenberg and Samantha Baker each had three hits and Schimpa, Bossler, Jersie Dawson and Sydney Klaer had two apiece. Baker and Dawson each drove in three runs.

The Vikings (13-12) got home runs from Kayla Kiggins and Annabelle Johnson to take the first game from the Bulldogs. Haylea Wilken and Chloe Hargreaves both doubled for Niles.

In the nightcap, Otsego opened up a 7-2 lead on Niles, heading in the sixth innings. The Vikings scored three in the sixth and one in the seventh, but could not overcome the early deficit.