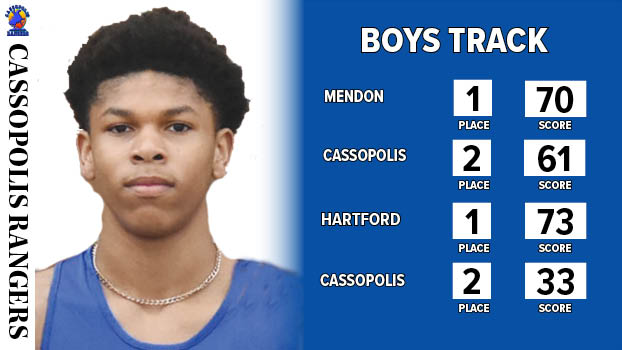 At Hartford, short-handed Cassopolis was swept by the Indians.

The Bobcat boys track team had just one first-place finish against the Shamrocks and Parchment.

The 3,200 meter relay team of Robert Hartz, Micah Colby, Kevin Roberts and Jake McCubbin posted a time of 9:28.73 to win the event.

Allison Lauri had a first and second place finish for Brandywine in the girl’s portion of the meet.

The Cassopolis girls team was defeated by Mendon 65-31 and Hartford 79-38.

Both teams were missing athletes due to baseball and softball games.

Cole Millirans won the 400 meters with a time of 55.85, Jaden Ivory won the high jump with a height of 5-8 and Jermaine Williams won the discus with a distance of 110-01.

For the Ranger girls team, the 400 meter relay team of Atyanna Alford, Makayla Elliott, Maliyah Flowers and Lisette Tilk ran a time of 57.88 for the team’s lone first-place finish.