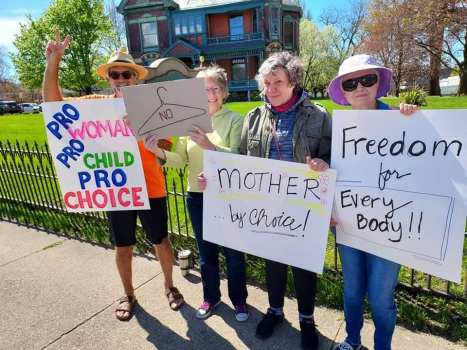 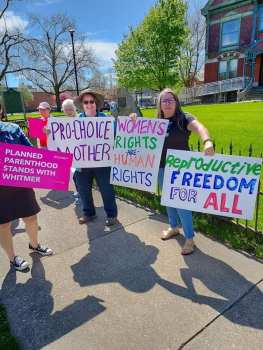 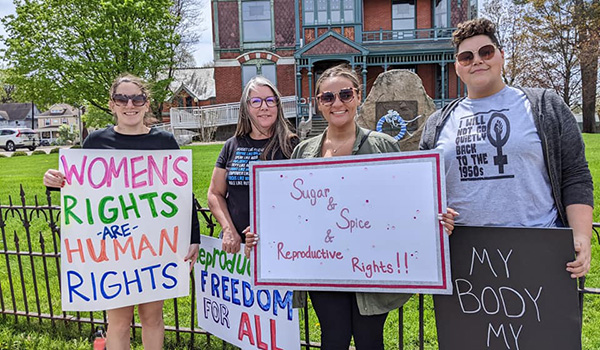 NILES — More than 50 people gathered in front of the Chapin Mansion Sunday morning for a rally supporting women’s reproductive rights.

The rally was hosted in response to a leaked draft of a ruling by the U.S. Supreme Court last week, which suggested members would overturn Roe v. Wade, a 1973 ruling that protects a pregnant woman’s right to choose to have an abortion without excessive government restriction.

If the Supreme Court overturns Roe v. Wade, Michigan’s abortion law – created in 1931 – would take effect. The law would make it illegal to perform abortions in many instances, including cases of rape and incest.

“The demonstration was a group of people trying to spread awareness that this is an issue,” said rally organizer Jodi VandenHeede. “Michigan is one of the states that either has a law on the books – which is what we had – or is prepared to put a law in place. … I think we had a great turnout for what we were trying to do. We didn’t have speakers. This was just a chance to come together, get the word out and let other people in Niles know that there are other people who support reproductive freedom. We had a large number of thumbs up, honks and waves, “We had a good deal of support.”

VandenHeede has not ruled out future rallies and acknowledged her work is far from over.

“Right now, the next step is to begin petition signing,” she said. “The petition would put an initiative on the Michigan ballot in November to ensure reproductive freedom for all. The goal is to let people in South County know there is support for reproductive freedom in this area. There is support for a law to ensure that people are able to choose whether to become parents or not.”

The petition being circulated statewide by advocacy group Reproductive Freedom for All would add a Michigan constitutional amendment to the 2022 November election ballot for voters if it receives approximately 425,059 signatures statewide. The amendment – if passed – would ensure access to a broad range of reproductive health care, including abortion.

VandenHeede said the petition process requires signatures be signed on paper and in-person.

“If you’re signing a petition online, you’re not,” she said. “Sometimes that is a little confusing. I’ve had people say they believed they signed a petition to support reproductive freedom when what they did was give their contact information to an adjacent organization.”

VandenHeede said that people seeking additional information regarding the petition or the issue itself can do so at mireprooductivefreedom.com.