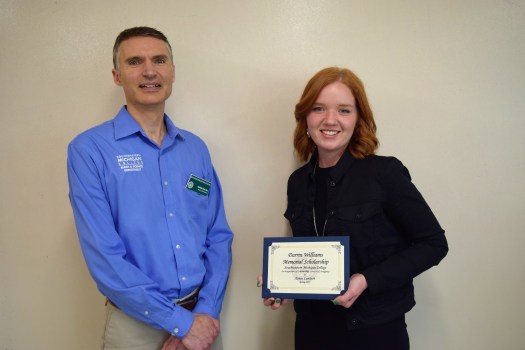 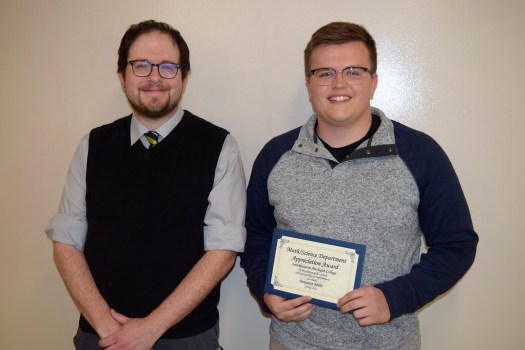 Lambert received the Darrin Williams Memorial Scholarship – the highest award bestowed – while Miller was awarded the department’s Appreciation Award in a ceremony attended by faculty and family in the William P.D. O’Leary Building on April 28.

The Darrin Williams Memorial Scholarship was established in memory of a 1988 SMC graduate from Dowagiac who died in an auto accident coming home for Christmas from Michigan Technological University. This STEM transfer scholarship recognizes a second-year student who exhibits traits Darrin exemplified: scholarship, service to the department, integrity, cooperation and a sense of humor.

Professor of Math and Science Andrew Dohm said Lambert is a great student.

“Great students don’t just show up, they participate, they’re serious and they’re curious,” Dohm said. “They seek to not just do, but to understand. They ask questions when they don’t understand and they’re willing to help others do well. They’re not afraid of hard work, they’re goal-oriented and they’re inspirations – and I’ve just described Aimee. On top of all that, she’s just a nice person.”

Dohm continued in his praise of Lambert.

“She’s a joy to have in class,” Dohm said. “I’m confident she’ll do great in the next phase of her career. She has the skills, knowledge and ability to be successful in whatever she does, but when I look back over the whole year because I’ve had Aimee in physics since last September, every assignment, every problem, every quiz, every exam is just 110 percent. She puts forth a lot of effort and is not afraid to ask questions, but more importantly, she is an inspiration to others who see her working so hard and helping others in lab activities.”

The Appreciation Award, given to Miller, was established in 2012 to honor a first-year or high school student who demonstrates a strong work ethic, shows academic promise, plans to pursue a STEM-related career and made a significant department contribution, according to department chair and math professor Ria Thomas.

“Ben’s willingness to help the department was unique to anything I’ve seen before. Students do research projects with faculty members for our Honors Program,” Pelfrey said. “As a dual-enrolled high school student, Ben was not part of the Honors Program. But out of the blue, Ben tells me gradients are closely related to something he’s been doing on the side. He was willing to take material we were working on in class and explain how it’s directly related to Calculus III. It was an Honors presentation if I’ve ever seen one.”

Miller intends to study aerospace engineering at the University of Michigan.