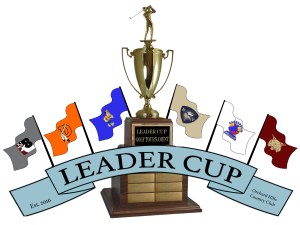 As a team, the Vikings shot 158 to edge Cassopolis, which finished with a 164 and Edwardsburg, which shot 167. Dowagiac finished fourth with a 180, Buchanan fifth with a 203 and Brandywine sixth with a 217.

“The boys always mark the Leader Cup date on their schedule,” said Niles Coach Dan Brawley. “This is an event that they want to win. The Niles players love this event, they enjoy helping each other in different situations, strategizing together and celebrating their successes. They love the comradery that comes with the Leader Cup’s format. The boys definitely don’t want the traveling trophy to travel out of Niles High School.”

With its back-to-back wins, Niles ties Edwardsburg with three victories at the Leader Cup. They are the only two schools to win the title in the six years it has been contested.

Logan Pflug and R.J. Drews led the Rangers with a 81, while Edwardsburg was led by Ethan Emenaker and Andrew Kurowski, who shot 82. Abraham Guernsey and Luke Spagnoli, as well as Dane Spagnoli and Travis Rehborg, both finished with a score of 90.

Aiden Mondschein and Tyler Miller led the Bucks with a 91. Carson Knapp and Robert Dillard shot 104 for the Bobcats.