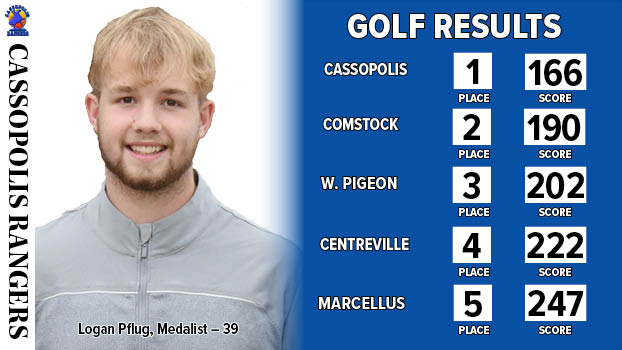 CASSOPOLIS — The host Cassopolis golf team continued its domination over the rest of the Southwest 10 Conference field as it won another jamboree at Diamond Lake Golf Course Thursday.

Despite the rain, the Rangers shot 166 to easily outdistance runner-up Comstock, which finished with a 190. White Pigeon was third with a 202, Centreville fourth with a 222 and Marcellus fifth with a 247.

In the opening game, Collin Bogue tossed a one hitter with 13 strikeouts.

The Rangers had eight hits in the contest, led by Malachi Ward and Spencer Wagner with two each.

Like in the first game, Cassopolis used an 11-run inning to break open the contest.

The Rangers had six hits, led by Kendon Williams, who was 2-for-3 with a triple and five RBIs.

Ethan Pflug and Reagan Wagner combined on a no-hitter.

The Rangers scores seven runs in the first inning and never looked back in blanking the Vikings 15-0 in five innings.

Hailey Hunsberger and McKenzie Boyer combined on a three-hitter with nine strikeouts.

Cassopolis finished with 16 hits, led by Makayla Robinson was 4-for-4 with two doubles and four RBIs.

Cassopolis led 16-3 in the second game when it was suspended with Bangor batting in the bottom of the fifth inning.