Rivals Brandywine, Buchanan meet in opening round of districts 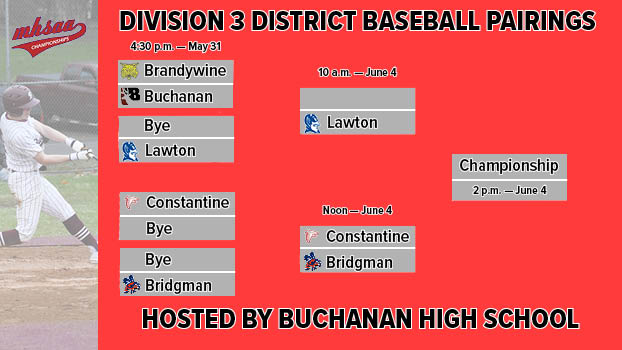 NILES — One of the toughest baseball districts in the state will pit long-time rivals against each other in the pre-district contest May 31.

Buchanan (11-2) is hosting the Division 3 District Tournament, featuring arch rivals Brandywine and the Bucks squaring off in the first game at 4:30 p.m. May 31. The Bucks are the defending district champions

“With three ranked teams in Division 3 in your district, and Lawton joining after winning their district last year, there’s no telling who can win this district,” he said. “Constantine could end up in the championship game as well. To prepare for such a good district, we tried to play some tough teams both from Michigan and Indiana. We just hope to stay healthy and play our best game each and every time.”

Brawley added that playing the Bobcats (8-4) in the first game does not matter come the postseason.

“Our philosophy doesn’t change,” he said. “We want to win every game. In playoffs, it’s one game at a time that you must win. It doesn’t matter who you play.”

Veteran Brandywine Coach David Sidenbender, whose team split with No. 12-ranked Bridgman Wednesday afternoon, agrees that it does not matter who you play. The goal is still the same — win or go home.

“The draw is random, so it is what it is,” he said. “I don’t really think about who won the previous years, I just focus on this year. They [Buchanan] are a very good team, obviously, and we will have to play our best to have a chance. Our district has always been one of the toughest in Division 3 in the state, and this year is no different.”

The winner of the Brandywine-Buchanan game advances to the 10 a.m. semifinal game against Lawton. The Blue Devils, who were defeated by the Bucks in the regionals last year, are currently 7-2 on the season.

The winners advance to the championship game, which is set for 2 p.m.