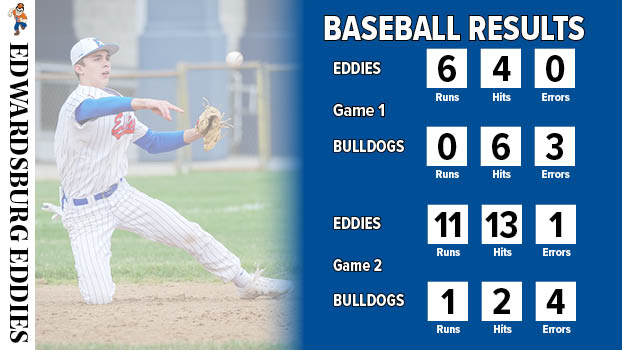 OTSEGO — Defending Wolverine Conference champion Edwardsburg does not appear to be in any hurry of relinquishing its title.

Across US-131, Dowagiac was shutout twice by Plainwell, by identical 10-0 scores.

The Bulldogs may have outhit the Eddies 6-4, but they could not find a way to push a run across the plate.

Edwardsburg meanwhile, used its four hits and took advantage of three Otsego errors to pick up the victory.

Payton Bookwalter had two hits and three RBIs for Edwardsburg. Sam Robinson struck out five to pick up the win.

In the nightcap, the Eddies used two big innings to account for nine of their 11 runs. Edwardsburg scored four times in the second to open up a 5-0 lead on the Bulldogs. The Eddies shortened the game with a five-run fifth.

Bookwalter tossed a two-hitter with Caeden Pulling coming on to pitch the fifth inning.

Edwardsburg is now 10-0 on the season and 6-0 in Wolverine Conference contests.

The Chieftains’ offense was held to two hits in both ends of the doubleheader.

Ben Klann and Henry Weller suffered the losses for Dowagiac, which dropped to 3-6-1 overall and 0-6 in league games.