Roundup: Golf teams finally getting some rounds in 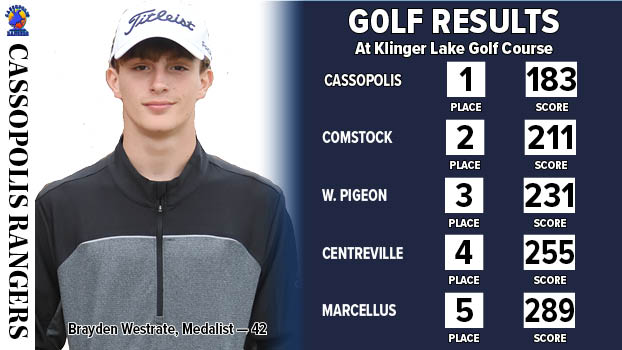 WHITE PIGEON — It has been a tough spring so far for area golfers, but teams and slowly, but surely getting some rounds in as the state tournament rapidly approaches.

With regionals scheduled either May 31 or June 1, that leaves basically a month to squeeze in all of the conference matches they already have scheduled, plus the ones that need to be made up due to snow and rain throughout the month of April.

The Rangers, led by medalist Brayden Westrate’s 42, shot 183 as a team. The Colts were a distant second with a score of 211. Host White Pigeon was third with a 231, Centreville fourth with a 255 and Marcellus fifth with a 289.

R.J. Drews, Logan Pflug and Kendon Williams all shot 47 for Cassopolis, which also got a pair of 51s from Kenny May and Collin Bogue.

The Vikings’ George Pullen was the medalist as he shot 43. Niles also had Evan Bruckner with a 45, Aiden Krueger with a 48, Dakota Schneider with a 49, Connor Weston with a 55 and Kade Delinski with a 58.

The Eddies were led by Andrew Kurowski’s 45. Edwardsburg also had Ethan Emenaker with a 46, Harrison Smith with a 48, Will Moore with a 52, Mason Crist with a 52 and Landon Putz with a 53.

The Eddies competed in the Gull Lake Invitational Thursday and finished 17th with a score of 384.

“We had way too many balls hit out of bounds,” said Dowagiac Coach Bob Turner. “We need to play smarter in that respect. We will bounce back, hopefully back under 200 tomorrow against Otsego at Hampshire.”

Buchanan finished third and Brandywine fourth at the jamboree at Pipestone Creek.

The Bucks’ Aiden Mondschein earned medalist honors with a round of 44.

Additional Buchanan scores were Carson Shelton with a 55, Nick McKean with a 58, Quinten Ruff with a 61 and Thomas Pleasant with a 66.

On Tuesday, the Bucks and Bobcats finished third and fourth at the BCS Jamboree hosted by South Haven at Hawks Head.

Mondschein was the medalist again with a 45.