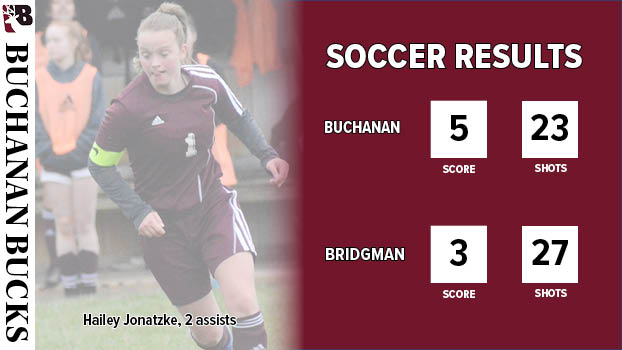 The win improved the Bucks to 5-3 on the year.

In Wolverine Conference play, Dowagiac and Edwardsburg were defeated on the road.

The Chieftains dropped a 2-1 decision to host Three Rivers, while the Eddies were shutout 2-0 by the host Bulldogs.

Beside French, the Bucks got goals from Jillian McKean and Alexa Burns. Hailey Jonatzke had a pair of assists, while Evyn Pruett and Burns were each credited with an assist.

Buchanan was outshot by Bridgman 27-23.

Three Rivers scored both of its goals in the opening half.

Hertta Mononen and Summer Morrill scored the goals, while Paige McDonald had both assists for the Wildcats.

Dowagiac, which finished with 13 shots on goal, got a second-half goal from Jessa Davis off an assist from Emma McCrorey.

Triana lee had eight saves for the Chieftains, who are now 2-1 in Wolverine Conference matches and 4-3-2 overall.

“We came out flat in the first half and did not look like ourselves,” said Dowagiac Coach Chad Davis. “After a couple sips of Gatorade and a quick conversation, we woke up in the second half and started playing Chieftain soccer. The girls put in a ton of work.”