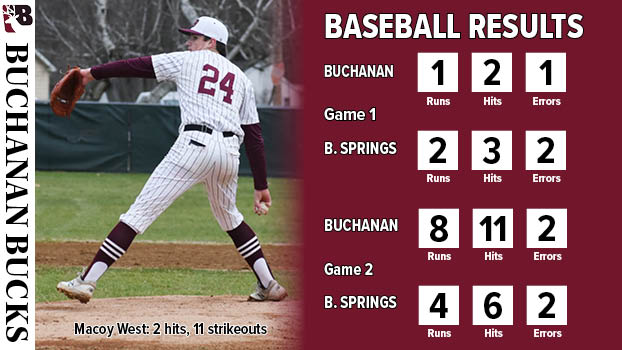 The Shamrocks (6-5) scored two unearned runs in the bottom of the first and then made them stand up thanks to the pitching of Garrett Brewer who tossed a two-hitter with 11 strikeouts.

Buchanan (8-1) cut the lead to 2-1 in the fourth, but could not cash in on some chances over the final three innings.

Macoy West took the loss despite an outstanding performance. He tossed a three-hitter with nine strikeouts.

In the nightcap, the Bucks opened up a 4-0 lead on Berrien Springs before the Shamrocks came storming back to tie the game at 4-4, heading into the top of the seventh.

Buchanan broke the tie when West was hit by a pitch with the bases loaded. Hunter Carrington followed with a sacrifice fly and Nick Finn a two-run single.

Buchanan finished the second game with 11 hits, led by Cade Preissing, who had three, while Murphy Wegner and Logan Grwinski had two apiece.

Thomas VanOverberghe picked up the win in relief of starter Hunter Carrington.

The Shamrocks finished with six hits. Tyler Ewalt took the loss in relief of Erik Belin.

The Bucks won their eighth consecutive game as they swept Berrien Springs 10-1 and 15-0.

Camille Lozmack struck out 11 to earn the win for Buchanan. The Bucks had 10 hits in the opening game, led by Hailee Kara, Hannah Tompkins and Christin Cooper with two each.

In the nightcap, Buchanan scored 12 runs over the first two innings, including seven in the second, to turn the game quickly into a rout.

Kara was the winning pitcher as she tossed a one-hitter with nine strikeouts. The Bucks collected 15 hits in the second game. Herman had three hits and Alea Fisher, Tompkins, Kara, Sage Pruett and Christin Cooper all had two hits.

Pruett had a double and a triple, while Alyvia Hickok and Tompkins also tripled.