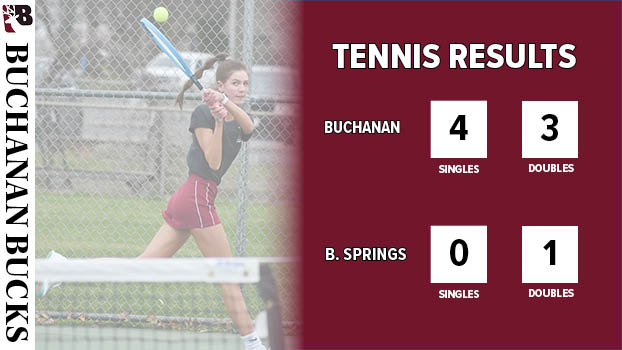 The Bucks defeated the Bison 7-1 in a non-divisional BCS Athletic Conference match Monday, while it scored the same win over host Berrien Springs in a BCS Red Division match Tuesday.

Buchanan’s No. 3 doubles team of Norah Kutemeier and Taegan Manigold-Summers won against New Buffalo and Berrien Springs. Paige Spitz teamed with Grace Bachman to earn a win at No. 1 singles against the Bison, while she teamed with Kaitlin Ferrell for a win against the Shamrocks.

Also picking up a win Monday was Brandywine.

The Bobcats remained undefeated with an 8-0 win over host Berrien Springs. Niles blanked host Sturgis 8-0 in a Wolverine Conference match.

In Wolverine Conference matches, Niles and Dowagiac were blanked by Sturgis and Three Rivers, respectively.

The Trojans were dominant in singles matches, while the Vikings were much more competitive in the doubles flights. The closest match of the day was a No. 1 doubles where Niles’ Sydney Schiele and Cadence Knight were defeated by Vivienne Merchant and Emily Schuller 6-3 and 6-4.

The Wildcats won all eight flights against the Chieftains in straight sets.