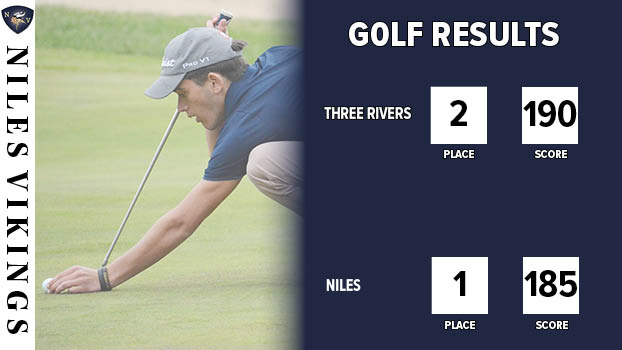 Besides Pullen, the Vikings got a 45 from Evan Bruckner, a 48 from Aiden Krueger and a 49 from Dakota Scheider.

Three Rivers was led by Isaac Adams, who shot 44.

Josiah McClelland led the Bulldogs to victory over the Eddies as he shot 41 to earn medalist honors.

Edwardsburg was led by Andrew Kurowski’s 46. The Eddies also have Ethan Emenaker with a 46, Harrison Smith with a 48 and Will Moore with a 52.

Berrien Springs shot 200 to win the jamboree. South Haven was second with a 207, Buchanan third with a 218 and Brandywine fourth with a 238.

The Bucks’ Aiden Mondschein shot 44 to earn medalist. Buchanan also got a 55 from Carson Shelton, a 58 from Nick McKean and a 61 from Quinten Ruff.

Brandywine was led by Miles Lemere, who shot 52. Robby Dillard shot 54, Will Hayes shot 65 and Carter Hayes shot 67 for the Bobcats.