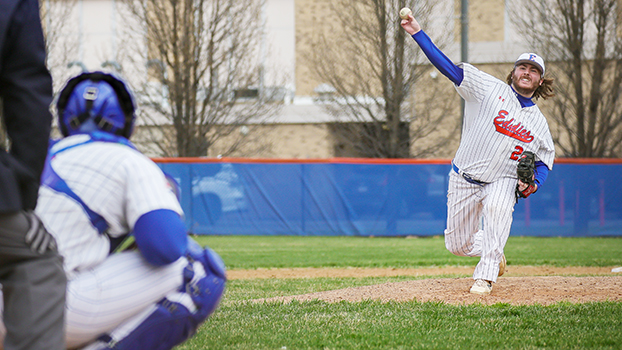 Sam Robinson and the Edwardsburg Eddies swept host Dowagiac Thursday to remain undefeated on the season and in the Wolverine Conference. (Leader photo/JEFF DOUGLAS)

In the opening game, Sam Robinson worked the first five innings, allowing one earned run on five hits with four strikeouts. A.J. Obren pitched the sixth inning and did not give up a hit.

The Eddies finished with 16 hits off of a trio of Dowagiac pitchers. Andrew Colvin, Caleb Layman, Logan McColley and Obren all had three hits. Layman had a pair of doubles and drove in three runs.

In the nightcap, Payton Bookwalter earned the win with relief help from Connor Ostrander. The two combined on a three-hitter.

The Eddies (6-0, 4-0 Wolverine Conference) are back on the diamond Monday as they host St. Joseph in a non-conference doubleheader.