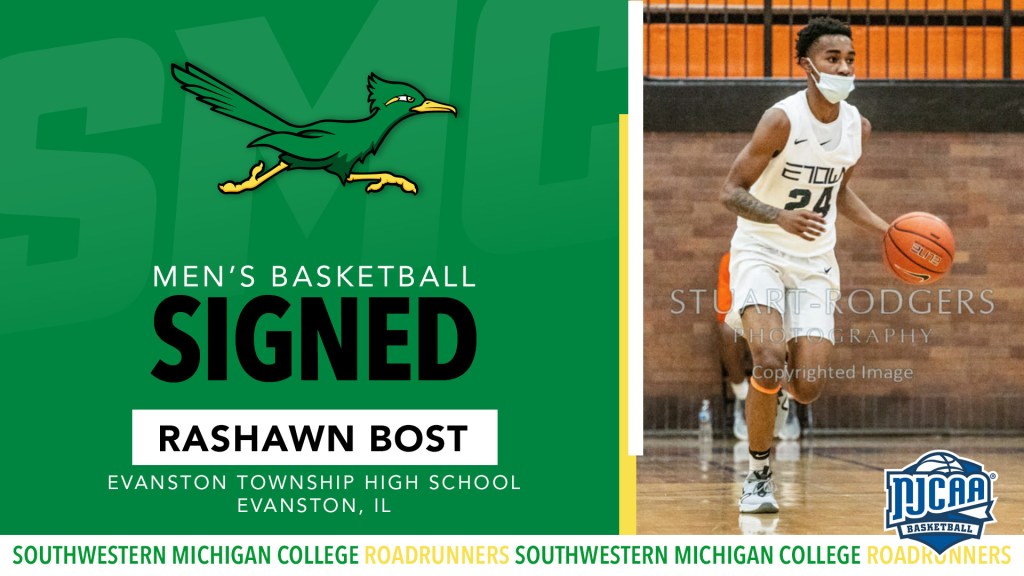 “The fit for the return of the Southwestern Michigan College men’s basketball program and Evanston Township High School’s Rashawn Bost is one that will be greater than the sum of one player and one program,” said Evanston Township Coach Mike Ellis. “Rashawn will be providing Coach Rodell Davis a highly-skilled guard, as well as a highly-skilled person of character. On the new court for the Roadrunners, and in opponent’s gyms, Rashawn will be a valued teammate that enjoys setting up others for scoring opportunities as much as he thrives on scoring the basketball.

“As a player, his greatest strengths as a lead guard are equally: a shooter from deep beyond the 3-point arc, getting to the basket, and attacking the defense in order to create shots for others.  As a person, Rashawn lives his life the way of a servant leader. He will put the wellbeing of the SMC basketball coaches and staff, SMC athletics family, his teammates, his fellow students and community fans before his own. Our Evanston Wildkits Basketball program is thrilled for Rashawn’s tremendous opportunity and future to make a positive impact for Coach Davis’ Roadrunner basketball program.”

“We welcome Rashawn to his new home,” Davis said. “Rashawn is a selfless player that made our program better from the moment he committed. He has the ability to take over a game and will his team to victory. I’ve watched him play for the past three years, when he is locked in, he has the potential to be the best player on the floor. Rashawn’s family is basketball royalty in the city of Evanston and his career at ETHS has added to that history.”