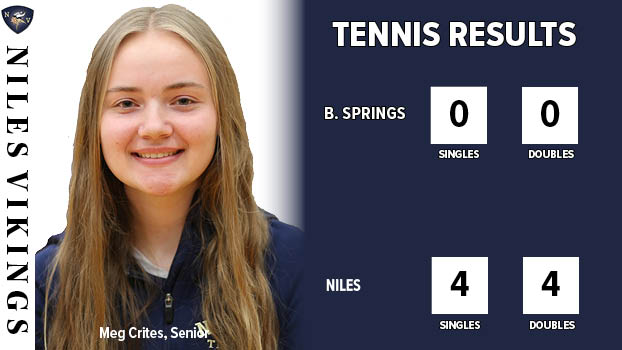 NILES ­ — Visiting Niles improved to 2-1 on the season as it blanked Berrien Springs 8-0 in non-conference girls tennis Thursday.

The Vikings did not drop a set in defeating the Shamrocks.

Niles is back on the court Monday as it travels to Sturgis for a Wolverine Conference match. 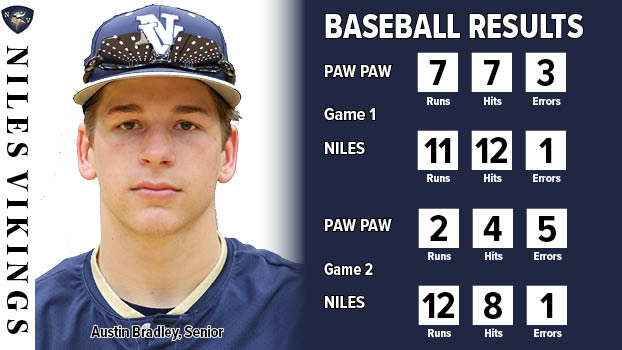 The Vikings used a big inning in both of their Wolverine Conference games against visiting Paw Paw Thursday.

In the opener, a seven-run fifth inning erased a 5-4 deficit, while in the nightcap, an eight-run first inning got Niles off on the right foot. The Vikings swept the Red Wolves 11-7 and 12-2. The second game lasted just five innings.

Niles banged out 12 hits in the first game, led by Austin Bradley was 3-for-4 with a pair of doubles and two RBIs. Sam Rucker and Brian Gonzalez also doubled for the Vikings. Hunter Fazi picked up the win in relief of starter Gage Vota.

Offensively, the Vikings were led by Talon Brawley had a pair of doubles for Niles, while Vota doubled and drove in three runs. Bradley also had a double.

Niles (3-4-1) is back in action Monday as it travels to Portage to face former SMAC foe Portage Northern in a non-league doubleheader.

The Vikings are back in action Saturday as they make up a non-league doubleheader with Berrien Springs beginning at 1 p.m. 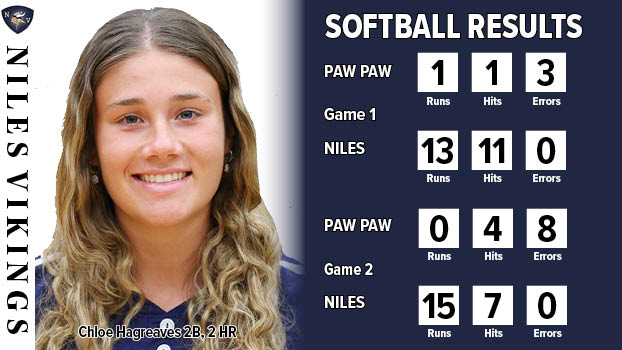 The Vikings improved to 5-2 with a sweep of Paw Paw Thursday.

In the first game, Mya Syson tossed a one-hitter with 12 strikeouts. Niles had 11 hits in the contest, led by Amirah Lee was 3-for-3 with two home runs and five RBIs. Chloe Hargreaves, Syson and Kayla Kiggins also homered for the Vikings.

In the nightcap, Haylea Wilken scattered four hits to pick up the win. The Vikings scored 15 runs on seven hits and took advantage of eight Red Wolves errors. Annabelle was 2-for-4 with a double, a triple and four RBIs for Niles. Chloe Hargreaves and Kayla Kiggins both doubled, while Coveney Davidson was 2-for-3 with an RBI.

Niles is back on the diamond Thursday as they host Vicksburg.