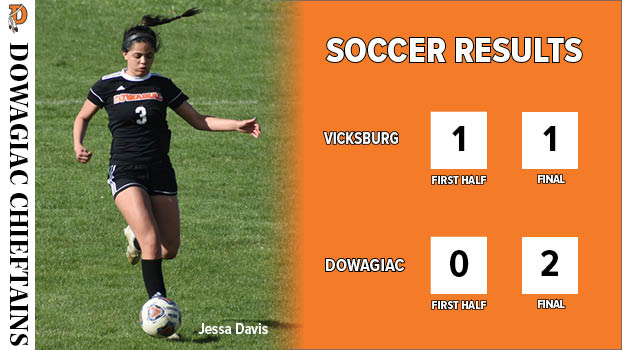 DOWAGIAC — Trailing 1-0 at halftime of its Wolverine Conference opener, the Dowagiac girls soccer team needed something good to happen in the final 40 minutes of play.

The Chieftains scored a pair of goals to rally for the 2-1 victory over the visiting Bulldogs to remain unbeaten on the season.

Kenya Lee got the tying goal 10 minutes into the second half. The score remained tied as the final minutes were ticking off the clock.

With 2:30 remaining in the match, Jessa Davis found the back of the net to lift Dowagiac to a victory as it improved to 3-0-2 on the season and 1-0 in conference action.

“Tonight, was a big win for the Lady Chieftains soccer team as they took down Vicksburg for the first time in several years,” said Dowagiac Coach Chad Davis. “The girls played a tough match tonight, and even though most of the match was played on our half of the field, we found a way to win. We told the girls to be patient and possess the ball and we will have a chance to score.”

Vicksburg had 22 shots on goal against the Chieftains compared to three for Dowagiac, Goalkeeper Triana Lee came up with 16 saves, and solid second-half play by the defense gave the Chieftains a chance to rally for the victory.

“Our defense and goalkeeper did an amazing job tonight not letting Vicksburg have a clean shot. I really think that was the difference of the game,” Davis said. “They had a ton of shots on goal, but none of them were clean. Our girls disrupted everything they wanted to do. The whole team did an amazing job playing together.”

The Chieftains return to action Friday as they host No. 10-ranked Kalamazoo Hackett.

The Eddies (2-1-1, 0-0-1 Wolverine) opened their conference season with a 2-2 draw against visiting Allegan Wednesday night.

Macey Laubach had a goal and an assist for Edwardsburg, while Samantha Stewart, off an assist from Jade Milliken, had the other goal.

The Eddies travel to Vicksburg Monday for another Wolverine Conference match.

The host Bees scored two goals in each half to defeat the Bobcats (1-4, 0-1 BCS Red) Wednesday night.

Emmy Dinges had a pair of goals for Bridgman, who improved to 4-0-1 overall and 2-0 in BCS Red Division matches. Mikayla Walsh and Dru Dinges had the other two goals.

The Bobcats travel to Constantine for a non-league match Monday.

Host Michigan Lutheran scored four goals in each half to defeat Buchanan 8-4 in a non-divisional BCS Athletic Conference Wednesday night.

Jenna French had three of the four goals for the Bucks, who drop to 2-3 overall. Evyn Pruett had the other goal for Buchanan. Jillian McKean had two assists, Pruett one and Sutherland Philip one.

The Bucks travel to Constantine for a non-conference match Friday.

The Vikings, who host Bangor in a non-conference match tonight, are now 1-5 on the season and 0-1 in conference play.