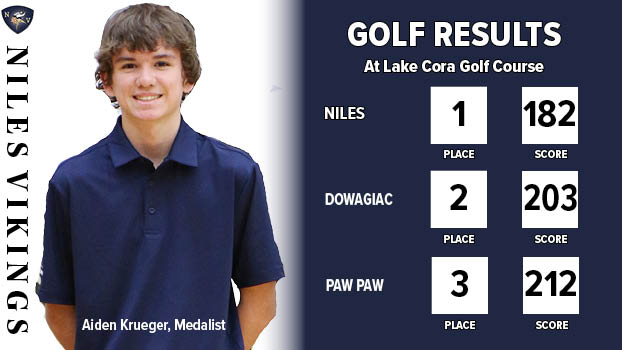 The Vikings shot 182 as a team to easily outdistance runner-up Dowagiac, which shot 209, The host Red Wolves finished with a 212.

Beside Krueger, Niles got a 45 from Evan Bruckner, a 46 from George Pullen, a 48 from Kade Delinski, a 51 from Nicky Berry and a 60 from Dakot Schneider.

“I was not unhappy with how we did,” said Dowagiac Coach Bob Turner. “We had a rough year last year and the spring weather hasn’t allowed for a bunch of consecutive good practice days.

Luke Spagnoli had the best round of his young career (first match of sophomore year). It was nice to see, especially since it was so cold and windy. Our Junior players had kind of an off night Abraham Guernsey had 52 and Kaden Sandora 58, both can do a lot better. Dane Spagnoli had a decent night, he hit the ball better than his 53. Newcomer Travis Rehborg showed some bright spots. I think we can shoot some decent scores by the end of the year.”

Dowagiac went right back to work Wednesday as it made up its match against Vicksburg, which was postponed by the weather earlier in April.

Niles is back on the links Monday as it hosts Three Rivers at Orchard Hills Country Club.