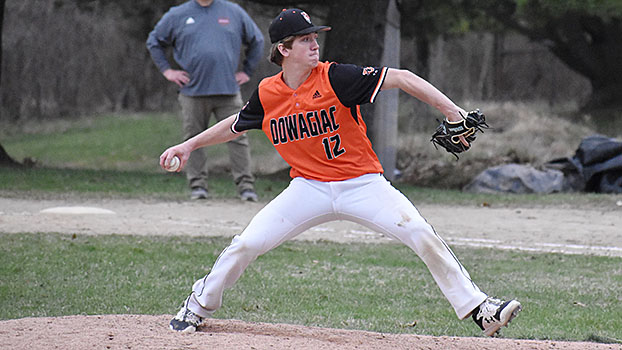 DOWAGIAC — Host Dowagiac used a tie against Niles and a lopsided win over Cassopolis to win the Bryan Frazier Memorial at Rotary Park Saturday afternoon.

After seven innings, the Chieftains and the Vikings were deadlocked at 6-6. Due to the time limit rule, the game ended in a tie.

Niles would defeat Cassopolis 14-5 in the second round of the tournament, while Dowagiac would beat the Rangers 14-4. Dowagiac won the tournament based on the fewest runs allowed tiebreaker.

The Chieftains had just four hits in the contest, but took advantage of five walks and five hit-by-pitches issued by Niles.

Talon Brawley and Austin Bradley had two hits for the Vikings, who finished with eight hits.

In its win over Cassopolis, Niles scored six runs in the second and seventh innings to turn a close game into a nine-run victory.

Bradley picked up the win for the Vikings, while Reagon Wager suffered the loss for the Rangers.

Gage Vota had a double, a single and drove in four runs for Niles, which got two hits each from Brawley, Bradley and Dane Asmus. Bradley also had a double.

In the day’s final game, Dowagiac used a seven-run fourth inning to erase a 4-3 Cassopolis lead. The Chieftains would add two runs in the fifth and sixth innings to end the game and earn the tournament championship.

Henry Weller tossed a three-hitter for Dowagiac to earn the victory. Cody Redmond took the loss in relief for the Rangers, who are 0-2 on the year.

Dowagiac finished with 17 hits, led by Cole Weller, who was 4-for-5 with a pair RBIs. Ethan Hannapel was 3-for-4 with two RBIs, while Jordan Simpson was 2-for-3 with an RBI. Kanyon Binns singled, doubled and drove in three runs. Jamal Williams added two hits and a pair of RBIs.

Malachi Ward, Kendon Williams and R.J. Drews had the three hits for the Rangers.