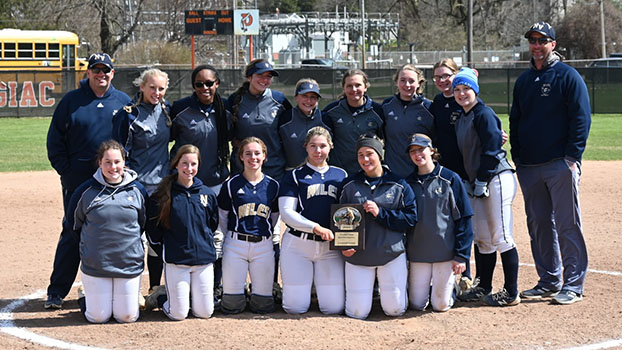 DOWAGIAC — Playing its fifth game in less than 24 hours, the Niles softball team edged Dowagiac 3-2 in the championship game of the Chieftain Invitational Saturday.

The Vikings rebounded from being swept by Edwardsburg Friday afternoon in its season and Wolverine Conference opener. Niles went 3-0 at Dowagiac to claim the title.

Chevelle Jaynes delivered the game-winning hit as she singled home Haylea Wilken with one out in the top of the seventh. Wilken reached base on a Dowagiac error and moved into scoring position on a ground out by Amirah Lee.

The Chieftains went down in order in the bottom of the seven, including a pair of Mya Syson strikeouts.

Offensively, Niles finished with four hits, including a two-run home run by Lee in the second inning.

Dowagiac was able to cut the Vikings’ advantage to 2-1 in the third inning on an inside-the-park home run by Caleigh Wimberley. The Chieftains (5-2) added a run in the fifth on a bases loaded walk to Sierra Carpenter, which scored Emma Allen, who had drawn a lead-off walk.

“We played much better softball today,” said Dowagiac Coach Mike Behnke. “Against Niles we had our opportunities and didn’t capitalize and then they took advantage of a dropped fly ball in the seventh.”

Dowagiac reached the title game with a 10-0 win over Hartford and a 10-6 victory over Kalamazoo Central that was stopped after five innings due to a time limit.

Against Hartford, Sarah Allen tossed a two-hit shutout for the Chieftains. Calley Ruff had a pair of hits, while Carpenter doubled and drove in three runs.

In the game against the Maroon Giants, Lyla Elrod was 3-for-3 with a home run and three RBIs. Aubrey Busby and Carpenter both had two hits for Dowagiac.