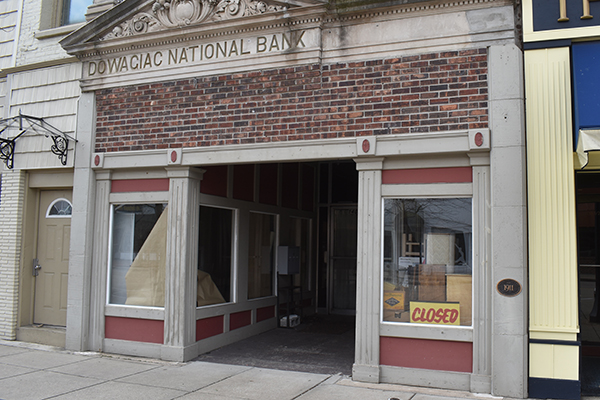 DOWAGIAC — When a downtown building came up for sale, an Indiana man with ties to Dowagiac jumped at the chance to return to the city.

In January, attorney Marcel Lebbin purchased 140 S. Front St. after being named Dowagiac city attorney in December 2021. As a result of the purchase, antique retailer RUsT has closed, and held a liquidation sale in March.

In addition to working with the city, Lebbin said he intends to open Lebbin Law Office to serve others in the community, as well as spend more time in Dowagiac.

“We wanted the building because my wife loves downtown Dowagiac,” said Lebbin, adding his wife had grown up spending summers in Sister Lakes. “Our kids still go up there. The lakes were actually a big draw. That’s the reason we knew about Dowagiac in the first place.”

While he said he expected to move into his downtown space in February, Lebbin’s plans have been delayed as RUsT owner Ann Velthouse continues to clear out her store.

“I already want the office to be in there,” he said. “I’ve been trying my darndest to work with Ann … If I don’t hear from her by the end of April, we’re going to have to start looking at some alternative options.”

Velthouse declined to comment. The blue RUsT sign, however, has been removed from the façade, and brown paper has been put up over the front windows.

Lebbin pursued his undergraduate studies at Purdue University, and earned his Juris Doctor degree from Dayton School of Law. He previously worked in Dowagiac as a partner for Mishawaka-based firm May, Oberfell & Lorber, which moved into the James E. Snow Professional Building in 2016.

“I was part of the reason they put that office up there,” Lebbin said. “We really like small towns. Dowagiac is a wonderful place and there’s a need in the legal community, so we’re hoping we can fill some of that, and step into the gap.”

“Between the two of us, we will be able to handle most things,” Lebbin said. “I specialize in corporate and municipal law, as well as real estate and estate planning. … My brother, he’s newer, but for the last few years he’s been working in Minnesota. He worked in the criminal justice system – not that he’s going to be a criminal defense attorney, but he’s got experience more on the trial side. We’ll work on whatever needs to be done, but real estate, estate planning and general business will be our focus.”

A Michiana native, Lebbin serves the community as a board member for REAL Services, the Student Hunger Drive and Stepwise, a program helping children with educational challenges, according to his website.