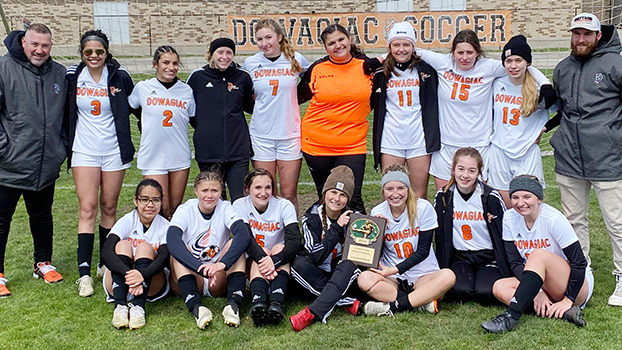 DOWAGIAC — The Dowagiac soccer team captured its own Chieftain Invitational after defeating Coloma 3-0 and tying with South Haven 2-2 in the championship match.

The Chieftains won the title by tiebreaker, which was fewest goals given up.

South Haven defeated Coloma 5-2 in the second round.

In its opening match against the Comets, Dowagiac got a pair of goals from Khloie Goins and a goal from Kenya Lee.

Halie Saylor had both goals for the Chieftains against the Rams.

“I thought the girls played fairly decent today,” said Dowagiac Coach Chad Davis. “We showed flashes again of moving the ball, being a very technical team and that would make any coach happy. We just have to figure out how to do that for 80 minutes. I was happy with the performance today the girls put in a ton of work so hats off to them.”

Dowagiac returns to the pitch Wednesday when it hosts Vicksburg in a Wolverine Conference match set to begin at 5 p.m.