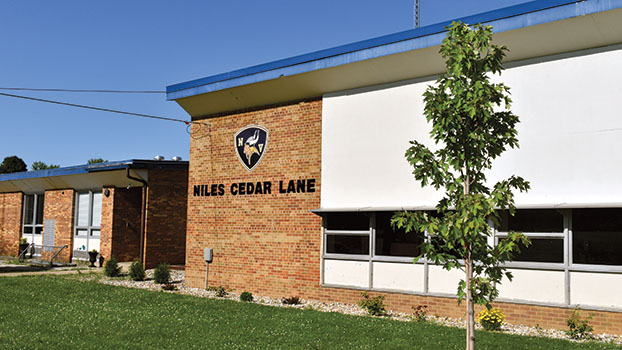 Niles Community Schools’ alternative education program, whose building is pictured, is located off of Tyler Street in Niles. In about a week, it will be joined by NCS administration, ancillary staff, a homeschool program, a teacher training room and WAY classrooms and offices. (Leader photo/BEAU BROCKETT JR.)

NILES — A Niles woman whose recall petitions against Niles Community Schools board members were rejected by the Berrien County Election Commission is trying again.

The original petitions were rejected because the petition language, which cited a letter from Applegate, did not specify that Applegate is the superintendent of NCS. Because not every voter has a child in the school district and therefore did not receive that letter from Applegate to know where the information is coming from, the commission could not approve the petition language presented as-is because it was not clear and factual enough to be approved and circulated.

The language in the refile petition is nearly identical to the original, with McNully adding the word “superintendent” to the refiled petition language.

The clarity hearing for the petitions will take place at 9 a.m. Monday, April 25 at the Berrien County Administration Building, 701 Main St., St. Joseph. NCS is one of two school districts in Berrien County to receive notice of recall petitions against board members this week, the other district being Lakeshore Public Schools.

According to the Michigan Association of School Boards, before recall petitions can be circulated in the community for signatures, Berrien County’s election commission must host a clarity hearing to determine whether the reasons for recall are stated clearly and factually in the petition language.

After the petitions have been signed, filed and checked by the filing official, the school board member named in the petition can challenge these signatures.

If enough valid signatures are collected, a recall election is then held. The targeted official becomes a candidate for the current seat and any other qualified resident may also run to fill the remaining portion of the term as well. Whichever candidate wins the election, incumbent or challenger, that person fills the remaining part of the current term.

A school board member named in a recall remains a full-fledged member of the board of education and must continue to perform all duties at least until the election is held and the results are certified.